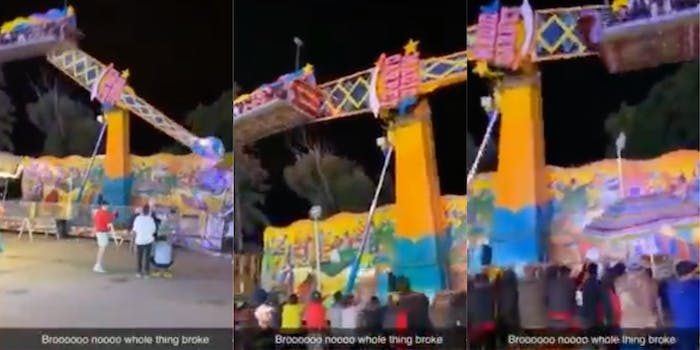 Video: Festivalgoers band together to stop moving carnival ride from tipping over

'I think if they hadn't been holding it, it would have fallen back.'

A viral video on social media shows a group of bystanders hurrying over to stop a carnival ride from tipping over in Michigan on July 9.

The footage comes from the National Cherry Festival in Traverse City, Michigan. The Magic Carpet Ride at Arnold’s Amusements Midway started spinning out of control, with the entire apparatus rocking back and forth. There are numerous videos documenting the moment, including one posted to Reddit.

People looked on in terror as the machine appeared to be on the verge of toppling. Screams of horror can be heard in the videos.

“We were walking by and saw the ride going faster than it normally does, and then parts started breaking,” festivalgoer Kobe Ramirez told the Traverse City Record-Eagle, before also stating the ride was “tipping back toward the river.”

The operator soon switched the power off, and dozens arrived to add weight to the ride’s base to prevent it from tipping over.

“I think if they hadn’t been holding it, it would have fallen back,” Ramirez said. “They unplugged it, so it was still moving, and they had to wait for it to slow down.”

Fortunately, no one was injured, but people are looking for answers for the almost tragedy.

“We’re not sure exactly what happened,” Joey Even of Traverse City-based Arnold’s Amusements told the Record-Eagle. “The ride came off the blocking.”

The ride was dismantled and removed overnight.