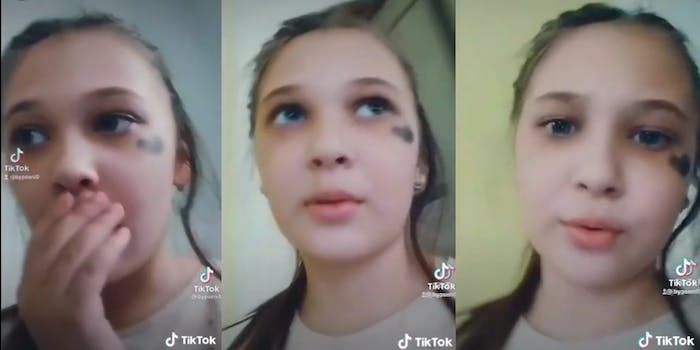 A 9-year-old girl created a TikTok video featuring a neighbor pounding on the front door and yelling. He has been accused of killing the child.

In the video, Felicia Kononchuk explains the man, 33-year-old Vasily Dunets, was knocking very loudly and for a long time, according to Yahoo News. “He has been standing here for several minutes, knocking and cursing. I’m scared!” she said, according to the outlet.

The incident occurred in the Russian city of Chita on Feb. 17.

She said that she and her brothers, aged 4 and 14, were home alone while their dad went to the store. According to Yahoo News, the father briefly left the children alone and had been doing home repairs. Kononchuk was reportedly afraid Dunets was going to break in at any moment and noted in her video that her “youngest brother just hid.”

“Something bad is going on here. … I don’t know what to do, he will just break our door now and that’s it. I’m very scared, my heart is beating,” the child said, according to 7News.

According to 7News, Dunets’ tirade went on for an hour.

Merely 15 minutes after Kononchuk posted the video to TikTok, Dunets allegedly fired his hunting rifle through the door, striking Kononchuk in the head. Kononchuk’s father returned from the store to find his daughter injured. She died on the way to the hospital.

Dunets, who was allegedly drunk at the time of the incident, was reportedly still sitting on a nearby staircase at the scene when the father returned to the apartment. He was reportedly upset about the noisy home repairs coming from the unit. Dunets was arrested, and a criminal case for the murder of a minor is reportedly underway. He, according to 7News, faces a life sentence if convicted.