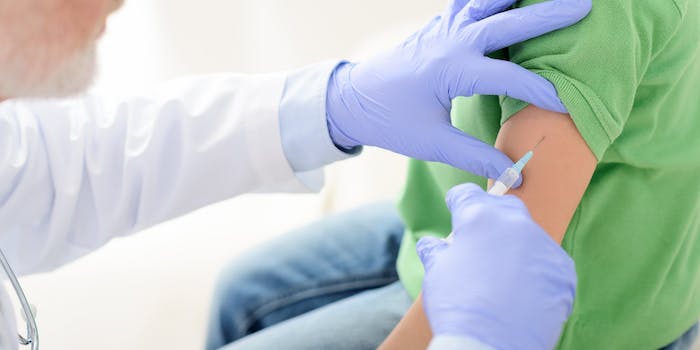 The nurse owned her in the comments section.

Karen the faux anti-vaxxer was called out on Facebook by her son’s pediatric nurse for lying about refusing to get him vaccinated.

In the post, Karen recounts taking her son in for a five-year check-up. Everything was supposedly fine and dandy until the nurse came in to give him a vaccine booster.

“I told her why I’d decided to decline it and she explained that it was my right to do so,” the woman writes.

Karen claims the nurse thanked her for taking a stand and told her “how much it pains her to have to give vaccines to uniformed families who don’t know they have a right to decline.”

The mother also says her son thanked her on the way home after she told him why she didn’t let him get the vaccine.

As it turns out, that was all an apparent lie.

Karen seemingly forgot she had the nurse as a friend on Facebook. And since she posted the fib on her wall rather than in a private group, the pediatric nurse took the opportunity to set the record straight in the comments.

“Believe it or not it’s completely legal for me to publicly state that I absolutely did not say that and for the record neither did you. It’s also not a HIPAA violation for me to say that I gave your son a shiny sticker at the end of the appointment for being brave, so people who read this post can take what they will from that,” the nurse wrote.

Though the nurse isn’t saying it outright as to not violate privacy laws, it seems they’re strongly hinting that the woman’s son did in fact get a vaccine that day.

The Facebook exchange was posted on multiple Reddit threads and has been seen by more than 100,000 people—many of whom expressed confusion as to why the mom would pretend to be an anti-vaxxer.

“This is super interesting that an anti-vaxxer would still get their children vaccinated. It means they probably do actually believe the science and want the best for their children but find something of value in the anti-vaxxer community,” wrote Reddit user u/TheMattHatter91.