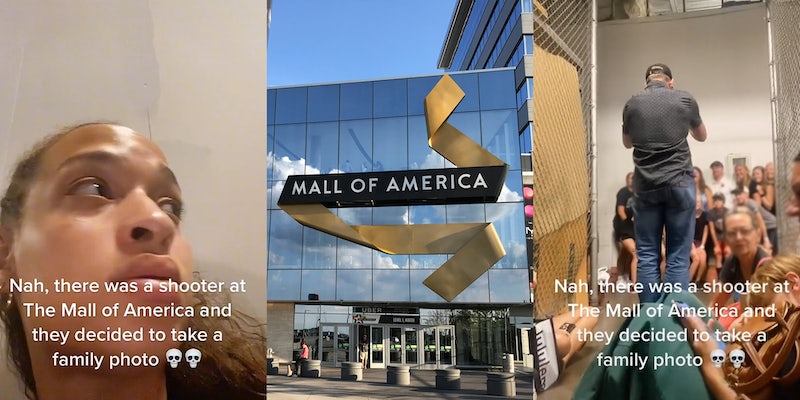 ‘Maybe they just wanted a last picture together’: People filmed trying to take ‘family photo’ while on lockdown at mall during shooting, sparking debate

This week, a TikToker sparked controversy after claiming a family took a group photo while on lockdown during a shooting at the Mall of America in Bloomington, Minnesota.

In a viral TikTok, which has over 1 million views and was posted by user Maya Afi (@insuredbyaflak), the TikToker filmed herself sitting in a crowded hallway that appeared to be in lockdown. In the video, the TikToker shows a large family gathering together and smiling for a family photo in the hallway.

“Nah, there was a shooter at The Mall of America and they decided to take a family photo,” the TikToker captioned the video. “Lockdown photoshoot.”

On Thursday, infamous super mall and amusement park Mall of America in Bloomington, Minnesota, went on lockdown when shots were allegedly fired by an individual after a fight broke out between two groups of people. No injuries have been reported from the incident, according to CBS News. Other videos of the shooting at Mall of America went viral this week, including videos showing individuals fleeing from the gunshots and hiding out in locked down stores, hallways, and kitchens.

The Daily Dot was unable to confirm if the viral video of the family photo took place at the shooting. Neither Mall of America’s press team nor TikToker Maya Afi responded to the Daily Dot’s request for comment via email.

Nevertheless, the video sparked controversy in its comments section. Viewers debated the appropriateness of the photograph, and many users criticized the family for their actions.

“Meanwhile everyone else was crying,” one user commented.

“Trauma makes for the best lighting,” another replied.

Some users defended the family, saying maybe they wanted to “assure friends and family” they were alive and well.

“Everyone deals with stress differently, maybe they are trying to keep it light for the kiddos,” one user argued.

“Maybe they just wanted a last picture together, it could’ve been the last time they’d ever see each other,” another defended.

Users also discussed the irony of how the shooting took place at the Mall of America tourist destination.

“Only in America,” another replied.