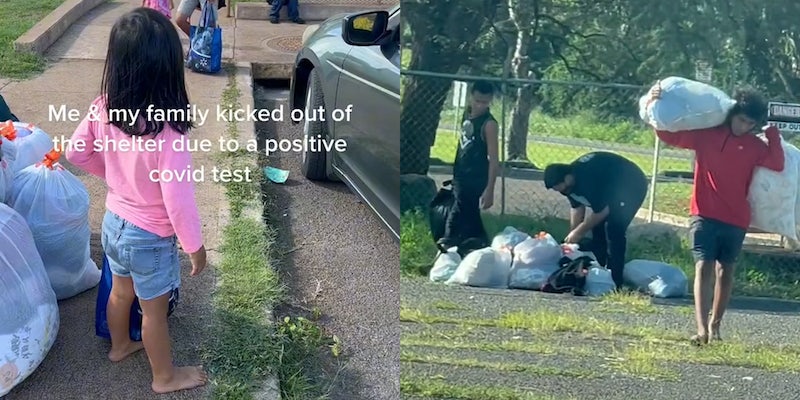 TikToker says her family was kicked out of homeless shelter over positive COVID test, sparking debate

'They definitely should've found some sort of self-isolating place for you to stay.'

A mother says that she and her children were kicked out of a homeless shelter after testing positive for COVID-19, sparking a debate on TikTok.

Sunny (@issa.mfckn.sunny2u.twats) is a mother living in Hawaii. She regularly posts content featuring her family and has over 12,100 followers on the platform.

Sunny’s video features her children and what appears to be several trash bags filled with their belongings.

“Me & my family kicked out of the shelter due to a positive COVID test,” the overlay text on the video reads. “Leaving us in the cold nowhere else to go.”

“How do you kick a family out having nowhere to go?” she questioned in the caption of the TikTok.

Sunny revealed on her account that she and her family became unhoused after she lost her job in August. Both she and her husband found new jobs, but since their family of 12 is too big for an apartment, they’ve remained unhoused.

According to a follow-up video posted five days ago, Sunny and her children are currently residing with her father and two brothers in Oahu while they quarantine. As of Monday, her GoFundMe page notes they’re heading back to the shelter after quarantining.

“Update: We are now staying at my fathers place which my two brothers reside and taking care of him. He has underlying conditions and I feel so hurt having to risk them all,” Sunny said in the comments section of that video.

The family’s latest videos show that they have since received their coronavirus vaccines and were even gifted a van.

Hawaii reportedly has a significant unhoused problem due to tourism making land, food, and housing extremely expensive for the local population. Commenters on the original video expressed sympathy for her situation and weighed in on if they thought the shelter was in the wrong.

“I understand them kicking you out for the safety of others, but they definitely should’ve found some sort of self-isolating place for you to stay,” @helena.theaa said.

“They can’t risk everyone getting sick and possibly dying,” another said.

“Everyone in Hawaii lives good except actual Hawaiians,” @Mrs.Collazo96 wrote.

The Daily Dot reached out to Sunny via GoFundMe and a TikTok direct message.