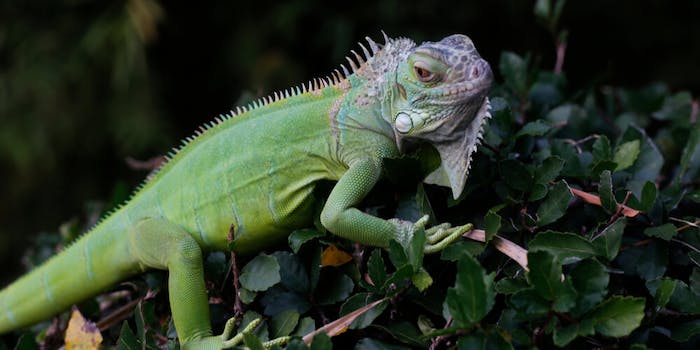 'If you like falling iguanas and getting caught in the rain...'

In Florida—the biggest epicenter of weird stuff besides the internet—the sky doesn’t rain cats and dogs. It rains iguanas, and for some, that means dinner.

Cold temperatures stun the invasive species and cause them to fall from their trees, according to the New York Times. Fortunately for the iguanas, the sun can heat them back to life.

But temperatures are dropping as low as 30 degrees in South Florida this week, so the National Weather Service issued a “falling iguanas” advisory on Tuesday.

“This isn’t something we usually forecast, but don’t be surprised if you see Iguanas falling from the trees tonight as lows drop into the 30s and 40s. Brrrr!” the National Weather Service Miami-South Florida tweeted.

Jan 21 – This isn't something we usually forecast, but don't be surprised if you see Iguanas falling from the trees tonight as lows drop into the 30s and 40s. Brrrr! #flwx #miami pic.twitter.com/rsbzNMgO01

Wilder still, people are taking advantage of the iguanas for business ventures. The Miami Herald reports that iguana meat is being sold via Facebook Marketplace. According to food reporter Carlos Frias, the meat is edible and should be prepared similar to chicken, so it makes perfect sense that the reptile has been dubbed the “chicken of the trees.”

But not everyone’s hungry for some “chicken of the trees.” One Twitter user shared pictures showing how they comforted a stunned iguana with a blanket.

“Might as well make him comfy with blankie and hat while he thaws out,” @loribale tweeted.

South Florida is waking up to cold temperatures and iguanas falling from the sky. Might as well make him comfy with blankie and hat while he thaws out. #FloridaWinter #iguana pic.twitter.com/1w1cgtZ8vx

Another Twitter user made an iguana-themed remix to Rupert Holme’s “Escape.”

“If you like falling iguanas and getting caught in the rain,” @portmanteauface tweeted.

Sadly, not every iguana is surviving the weather. One Twitter user mourned the loss of their local lizard.