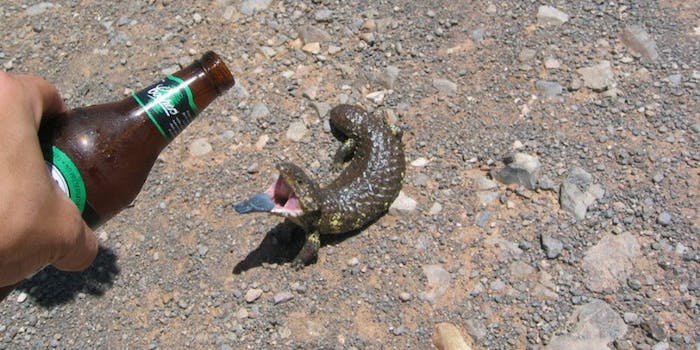 The drunk Friday Lizard meme is ready for the weekend

You have been visited by the Friday Lizard.

Friday is objectively the best: work is over and we can commence drinking until we can’t feel our faces or emotions. It’s healthy and everyone loves it. In Australia, Friday also means the arrival of the Friday Lizard, a fun-loving lil green guy who became a meme after he was seen thirsting for a drop of beer.

if you see this image you have been visited by the friday lizard. a sick friday will come to you but ONLY if you RT pic.twitter.com/UDOFqUoOHU

This week, BuzzFeed News delved into the origin and meteoric rise of the Friday Lizard, and explained why he’s a meme on his way up. Spoiler alert: it’s because it’s a lizard who wants to drink beer, a beverage for people.

Although the lizard lives in Australia and is only now just spreading beyond Australian meme culture, it actually originated with a Canadian tourist. Misplacedcanuck posted the lizard on Reddit in 2013 with the title, “It’s so hot Down Under even the lizards need an ice cold beer.”

A year later, Alex McClintock, a social media guy for Australia’s Radio National, christened the little guy “Friday Lizard,” and began forcing him into meme status by tweeting him out most Fridays.

But Friday Lizard didn’t catch on until it crossed paths with other Australian memes. BuzzFeed concluded the thirsty reptile didn’t pop off until someone combined him with this viral photo of Australian prime minister Tony Abbott.

Now Friday Lizard had sunglasses, making him more Friday than ever before.

And that was just the beginning of the Friday Lizard remixes. McClintock started Photoshopping the lizard into different joke scenarios every week. There are now dozens, maybe hundreds, of them.

I’m not going to lie to you: most of them are by McClintock. Is Friday Lizard a meme because BuzzFeed said so, or is he just one man’s quirky obsession?

It kind of doesn’t matter. Friday Lizard is the Velveteen Rabbit of web culture—he began life as a forced meme, but now he’s real because someone loved him very much. Soon we won’t remember a time when Fridays didn’t come with lizards.

We've reached Friday arvo after a rough week, both online and off. Time to grab a cold one, escape the snakes and have a sick one, y'all! pic.twitter.com/ih1PtDfuUr

Not everyone is happy about this, though:

Does Friday Lizard just reinforce the pattern of laboring in drudgery for most of our lives, then getting wasted during the only time we feel truly human?

Eh, probably. But we don’t need to think about that right now. It’s almost Friday! Have a sick one.