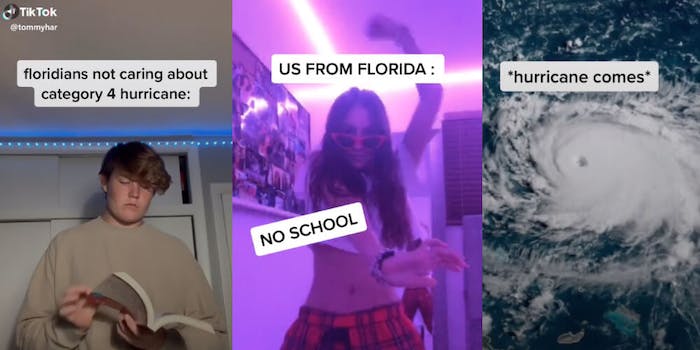 This is peak Florida.

In true Florida fashion, Floridians are seemingly unphased by the category 5 hurricane heading their way–this includes the teens, who are busy making Hurricane Dorian memes on TikTok.

Journalist Kalhan Rosenblatt compiled all the best Hurricane Dorian memes she was seeing and shared them on Twitter. In the TikToks, the teens make fun of other states for being so worried about Florida while also poking fun at Florida for being so chill. They are excited about the prospect of school being canceled so they can have hurricane parties and “be outside during the ‘hurricane””–as one TikTokker put it. And some are upset that school has yet to be canceled for them.

In some of the creations, the teens even ~become~ the hurricane.

I might get a tattoo of the “True Floridian” riding an alligator, tbh. pic.twitter.com/MKRbV1j9JJ

It’s the Florida version of a snow day, I guess! pic.twitter.com/fwmf3aaM3S

I feel this on a molecular level. I’m now v stressed about hurricanes as an adult. As a kid, I was like “THANK YOU FOR THIS UNEXPECTED VACATION, MR. HURRICANE!” pic.twitter.com/eyCn8JMehG

I laughed so hard at this one. pic.twitter.com/uqg7Av08wN

If you know, you know. pic.twitter.com/NeI7QBU1mL

Hurricane Dorian is slated to make landfall sometime on Sunday. The hurricane was originally set to hit Puerto Rico, but it has since veered course and is now set to hit the Bahamas and possibly Florida as well as the Southeast coast.

Its category 5 rating–the highest rating one can get–dubs it a “major” hurricane on the Saffir-Simpson Hurricane Wind Scale, which is used to determine the strength of a hurricane by measuring its sustained winds and potential property damage. Hurricane Dorian is currently sustaining 160 mph winds. According to the National Hurricane Center, a category 5 hurricane will completely destroy houses, power outages will last for an extended period of time–possibly months–and “most of the area will be uninhabitable for weeks or months.”

The forecast for Florida’s storm surge–or its flooding–has yet to be assessed, but the NHC warns of a “life-threatening storm surge.”

“Since Dorian is forecast to slow down and turn northward as it approaches the coast, life-threatening storm surge and dangerous hurricane-force winds are still possible along
portions of the Florida east coast by the middle part of this week,” the NHC reports. “Residents should have their hurricane plan in place, know if they are in a hurricane evacuation zone, and listen to advice given by local emergency officials.”

Despite its severity, Floridians are relatively relaxed. Along with its creative TikTok teens, a grocery store has received backlash for making Hurricane Dorian-themed cakes.

A Publix hurricane cake. If this ain’t the most Floridaest thing ever lol pic.twitter.com/WnU5HyezP4

Here’s where to get all the latest updates on Hurricane Dorian.