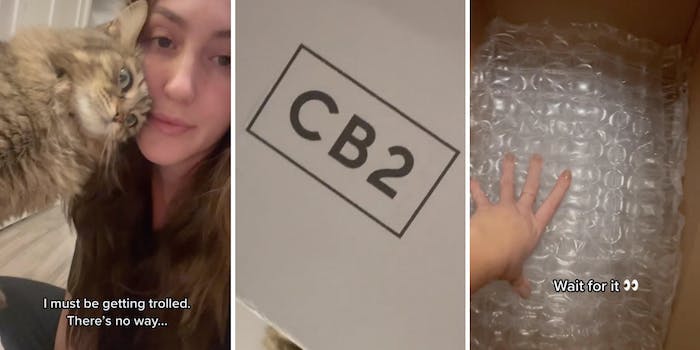 'That’s so nice of them to send you some little items with your bubble wrap.'

In a viral TikTok video, one user unboxes an order of napkin rings from the furniture store CB2 with a seemingly excessive amount of packaging, sparking debate among users in the comments.

“I must be getting trolled… There’s no way,” text overlay reads in the video.

Reid said in a comment that even the tiny boxes holding the items were excessively packaged.

“Am I on PUNK’D? Ashton… Sweetie… you can come out now…” Reid captioned the TikTok.

“Someone at the warehouse was like, we only have large boxes do you think this is ok and the supervisor said [moon face emoji] looks good to me,” one user said.

“That’s so nice of them to send you some little items with your bubble wrap,” said another.

One user claimed that CB2 is known for their excessive use of packaging.

“Ok I thought this was a weird one time thing when I ordered from them but apparently it’s their thing,” they said.

Some users said warehouses use a large amount of packaging fairly often.

“I work at a warehouse and I believe it. We run out of boxes or new ppl start etc,” one user said.

“I order supplies for the doctor’s office I work for and this is unfortunately common,” said another.

However, many users joked that the box is perfect for Reid’s cat, who is featured in the TikTok.

“I see they shipped the box well for the cat. cats deserve a nice crisp box to sit in,” one user said.

“That package was for the cat actually,” said another.

The Daily Dot reached out to Reid via TikTok comments and CB2 via email.