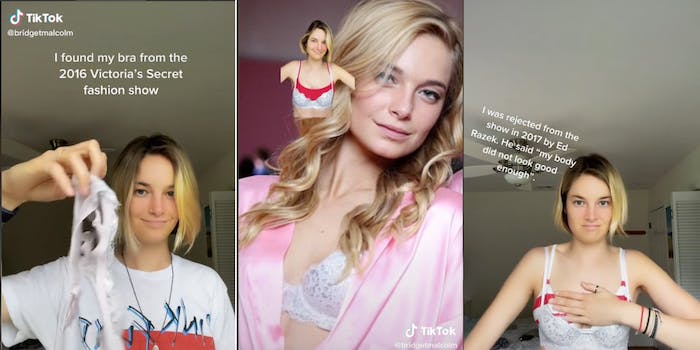 ‘The sadness behind my eyes breaks my heart’: Ex-Victoria’s Secret model calls out the company for body shaming in viral TikTok

She says a former exec body shamed her.

In the wake of the company’s rebranding, a former Victoria’s Secret model is calling out the corporation for its harmful practices in a now-viral TikTok video posted on June 26.

The model is 29-year-old Bridget Malcolm, and she walked in the 2016 Victoria’s Secret fashion show.

Malcolm explains that at the time of the show, she was underweight and wore a size 30A bra. Now, Malcolm says she’s at a healthy weight and wears a size 34B.

Malcolm shares photos of her on the runway and says, “Look how big [the 30A bra] was on me. The sadness behind my eyes from the 2016 show breaks my heart.”

Victoria’s Secret recently announced it will be replacing the VS Angels with the VS Collective, which instead of its usual models will feature athletes, activists, and other celebrities with a wider range of body types.

Malcolm addresses this switch in the TikTok and calls the move “performative allyship” and a “joke.”

The current CEO of Victoria’s Secret, Martin Waters, recently told the New York Times that the company “needed to stop being about what men want and to be about what women want” with regard to the brand’s slow move toward inclusivity.

Malcolm also spoke against Victoria’s Secret in an essay for Harper’s Bazaar in 2018. She said the harmful dieting “ruined her digestive system” and gave her “chronic anxiety.”

She recently started a TikTok series highlighting “times the fashion industry has sucked.”

These videos discuss times she felt dehumanized while modeling, including being fat-shamed by healthcare professionals, sexually harassed by industry professionals, groomed by an older man, and encouraged to use cocaine in order to spur weight loss. This resulted in health and mental issues, including PTSD, which she says she is now working through with a therapist.

She also says she had a breakdown in 2016 and was unable to leave her house without severe anxiety for a year.

Malcolm said she was afraid to speak up for so long out of fear of losing work, but now she is happy, healthy, and sober and wants to be transparent about her experiences in the industry. She is still modeling but says she chooses only healthy people and brands to work with.

The Daily Dot reached out to Malcolm for comment.