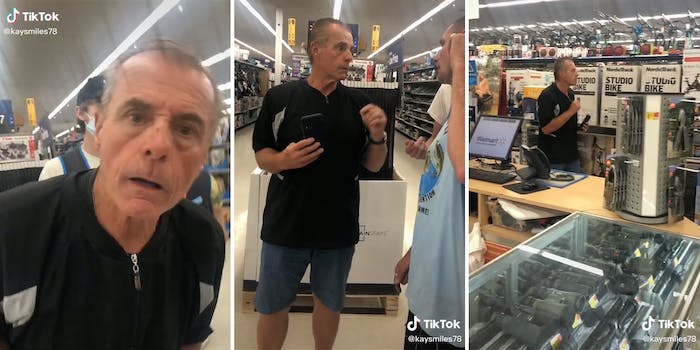 'I wonder how many people he chose not to save because of his racism.'

A viral TikTok video shows a former firefighter going on a racist and xenophobic rant after hearing a worker speaking a language other than English at a Walmart in Nebraska.

TikTok user @kaysmiles48 filmed and posted the trio of videos featuring the verbal altercation at a Walmart in Lincoln, Nebraska. She and a middle-aged man, who claims to be a retired firefighter and peace officer, are already in disagreement over how he spoke to a store employee.

“A uniform does not give you the right to be racist,” @kaysmiles says.

The ex-fireman claims he’s being disrespected because he’s not in uniform and tells the woman, “When you’re in America, you better learn our language.”

Another employee tells him she was in the military, too, to which he says: “Not like us.”

The man has a nonsensical answer when the woman challenges him on why he spoke to the Hispanic employee disrespectfully.

By the second video, he is in full meltdown mode.

“When someone doesn’t speak English, we can’t communicate in Los Angeles, guess what happens, honest? People die,” he says, implying that non-native English speakers are more likely to die during emergencies because first responders can’t communicate with them.

Another white man arrives and tells the man to simmer down.

“I’m a retired fire, police officer, an I’m MMA trained,” the male Karen tells the man. “Ever heard of Chuck Liddell? We train guys like that. How about Conor McGregor? Get away from me. Get the f*ck away from me?”

The man then tells the male Karen that he’ll “f*ck him up.”

“Seriously? You’re talking to L.A.’s finest,” the man going on a racist verbal attack says. “Get that guy off me; he probably has a gang background based on those tattoos.”

Things then get weird as the other man claims he’s seemingly part of the Aryan Brotherhood.

“Amen. Let’s go. God bless you anyway. Jesus died on the cross for you,” the male Karen says in response.

The other man then says, “Thank you for your service.”

However, the former fireman says to him: “You stay away from me! Because you don’t know! I’m wearing baggy clothes, but this is 200 pounds of (inaudible). Get away from me.”

“You don’t wanna know what these eyes have seen,” he says, starting the third video in which he continues his rant about the employee not speaking English well enough for him.

The three videos have a collective 8 million views.

Viewers are shocked at the notion the man was once tasked with saving lives. “I wonder how many people he chose not to save because of his racism,” one viewer said.

The Daily Dot has reached out to @kaysmiles48 for information.