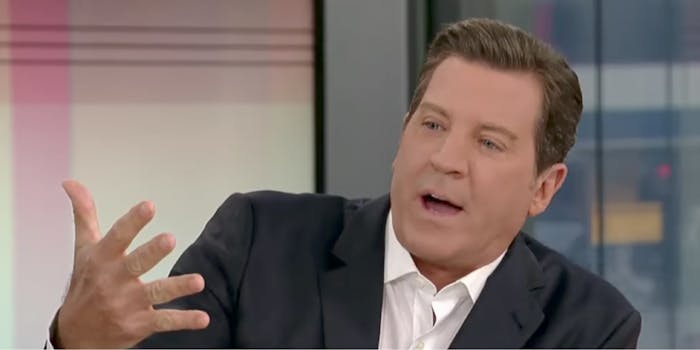 Bolling has denied the allegations.

Fox News and host Eric Bolling have “parted ways” one month after it was reported that Bolling had harassed colleagues with inappropriate text messages, including dick pics.

According to HuffPost, Fox News confirmed Bolling’s departure from the network Friday. Bolling was a co-host of the show Fox News Specialists, and worked on the panel show The Five before that. Fox News will cancel Bolling’s program.

Journalist Yashar Ali originally broke the story of Bolling’s inappropriate behavior for HuffPost last month. According to 14 anonymous sources working in or with the Fox News and Fox Business channels, three women received dick picks from Bolling over several years.

Bolling was subsequently suspended, and Fox News launched an independent investigation. Bolling denied the allegations and then filed notice that he was suing Ali for defamation for $50 million.

Bolling’s departure becomes the latest in Fox News’ recent slew of reactions to harassment allegations made against high-profile hosts and staff. Earlier this year, host Bill O’Reilly was dropped after it was reported that Fox had made multi-million dollar payouts to his accusers over the years. Last summer, CEO Roger Ailes left the company after host Gretchen Carlson accused him of sexual harassment. Host Sean Hannity has also been accused of inappropriate conduct by a former guest.

“Eric Bolling and Fox have agreed to part ways amicably,” the network said in a statement to HuffPost. “We thank Eric for his 10 years of service to our loyal viewers and wish him the best of luck.”