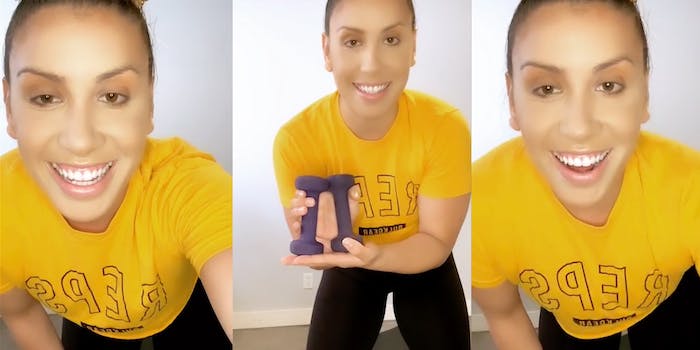 'I don’t think multi-billion dollar corporations need to squeeze their lowest paid employees. Do you?'

High-end fitness chain Equinox fired one of its trainers Thursday after she spoke out about safety concerns and pay cuts in response to the company’s reopening in the middle of the coronavirus pandemic, BuzzFeed News reports.

Monica Davis, who was employed by Equinox for three years, told BuzzFeed News Wednesday that she didn’t feel safe going back to work with the continued prevalence of the coronavirus.

She said she was concerned about “recycled air and body fluids” in such a confined setting and raised concerns about “spoiled, entitled” Equinox members not following social distancing guidelines and not wearing masks.

Davis told the Daily Dot that Equinox paid her roughly $12 an hour for five hours of work, which would have decreased to $9 if she had returned for the company’s reopening. She said being paid less than California’s minimum wage during the pandemic didn’t sit right with her.

“You guys are asking the people at the bottom of your food chains to take this hit and bear the breadth of lost revenue,” Davis said, per BuzzFeed News.

Davis said she is not sure Equinox bowed to the concerns of its employees. She said weeks ago she organized a group of employees and sent a list to the CEO outlining their concerns and it resulted in a call with upper management.

“I felt like while the call went well, they ignored my pleas that I was in a financially vulnerable situation,” Davis told the Daily Dot in an email.

Davis said going back to work for less money was a gamble she didn’t want to make, so she opted to stay home and continue her online business, where she teaches Instagram live workouts. She said her online following builds a positive environment in her workouts because they are also looking for safer ways to workout.

She said that cutting instructors’ pay is counter to Equinox’s public image and that the executive level of the company is “Trumpy, greedy, capitalist-y bullshit.”

Davis cited the chain’s owner, Stephen Ross, as an example. After Ross hosted a fundraiser for President Donald Trump last year, some called for a complete boycott of all companies with which Ross associates, including SoulCycle, Pure Yoga, and Equinox, according to the Washington Post.

Davis wrote on Instagram that speaking on the record was scary, but it was a decision she “felt comfortable making.”

“I don’t think multi-billion dollar corporations need to squeeze their lowest paid employees,” Davis wrote. “Do you? If not, I hope you continue fighting on behalf of the little guys like me. I have a good amount of privilege and I’m still getting screwed.”

After sharing her concerns with BuzzFeed News, Equinox fired Davis on Thursday due to the “disparaging comments” she made about the company’s members and executives.

Equinox did not immediately respond to the Daily Dot’s request for comment.

Davis wrote on Instagram that she will “be ok” and that she remains “optimistic.”

“While it always stings to get fired, I do think I’m on my way to bigger and better things,” Davis told the Daily Dot. “I’m someone who’s dealt with a lot of financial insecurity and it’s made me more aware of how our country punishes the people struggling to make ends meet.”

Update 3:48pm CT, July 14: This article has been updated with quotes from Monica Davis.