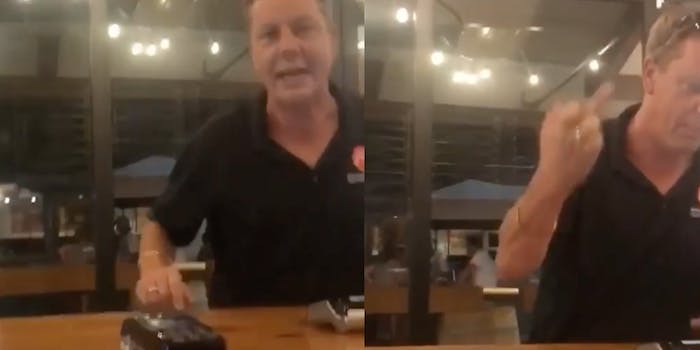 The video of the CEO's rant is going viral.

A viral video shows a man going on a racist rant in a Fresno, California taproom after a waitress refused to serve him another beer.

The waitress Rebecca Hernandez said the customer Jason Wood had been drinking for several hours and that the employees decided to cut him off. When he began to insult her, Hernandez started to film the interaction. She posted the video of it to Instagram on Thursday.

In a comment along with the video, Hernandez said that the man had first tried to bribe the workers to give him more drinks. When that didn’t work, he began using racist slurs against Hernandez.

In the video, the man can be seen repeatedly flipping off Hernandez. At the beginning of the video, he makes fun of her voice. Then he says, “don’t worry about me Saudi Arabian.” She asks him to clarify what he means by calling her Saudi Arabian. He responds that she’s “f*cking stupid like they are.”

Wood then says that he doesn’t mind being cut off from drinking because he “can buy this bar in f*cking ten seconds.”

As the video continues, Wood gets increasingly irritated and continues to call Hernandez names. When she makes it more obvious that she’s filming Wood, he looks directly at the camera and identifies himself by his name and says he’s the owner of a company called Actionable Insights.

Following that, Hernandez sarcastically thanks him and says it was “a pleasure” to be his waitress. Then, that’s when Wood completely loses it, calling her a “dark-haired sand N-word.”

Hernandez posted the video of the racist interaction on Instagram the following morning.

“Like so many others, we are tasked with filming our own abuse to prove that it actually happened,” Hernandez wrote in the caption. “I hope sharing this can be a lesson to others, it doesn’t matter how much money or power you think you have, it clearly can’t buy you dignity.”

Another organization named Actionable Insights said it has received several messages after being mistaken for Wood’s company, according to Fox 26 News. The other Actionable Insights, where Wood is the CEO and president, now has an inactive website.

There is a petition circulating that calls for Wood to be fired from these positions at the company.

“Don’t be afraid to stand up to these people, you are human first and foremost and no one deserves to be treated this way,” Hernandez wrote.