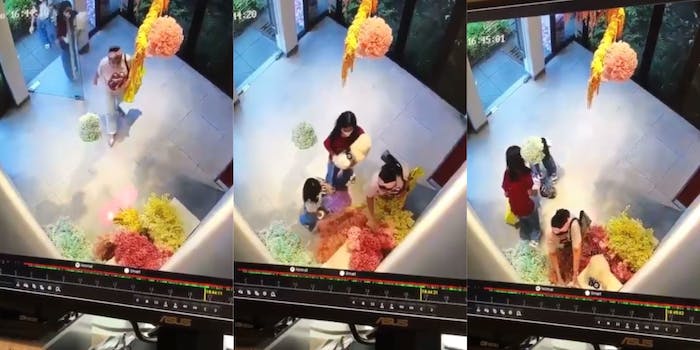 'It seems like they are advertising some dog food.'

A Reddit video shows a Karen and her daughters ruining an art installation to make room to take photos of their dogs.

u/sunandsands posted the video to Reddit’s, ahem, r/iamatotalpieceofshit page, with the caption: “Karen and her little Karens in the making ruined an art installation to take photos of her dog.” The poster, in subsequent comments, has since regretted calling the girls “little Karens.”

The video shows security footage of a flower-centric art exhibit from overhead. Since being posted a day ago, it’s accrued 18,933 Reddit points and sparked 779 comments.

The entitled Karen entered the room and immediately decided to push flowers aside, which appeared made explicitly for tourists’ view and enjoyment. It is unknown where the security footage originated.

She also seemed unconcerned with who might’ve wanted to enjoy the splendors.

One redditor wondered if the setup was for some influencer clout, as it appeared the Karen was staging a photoshoot: “It seems like they are advertising some dog food when putting the bag near the dog.”

The entitled Karen’s behavior, before the installation destruction, was even off-putting to many commentators: “I didn’t like her from the start. What kind of person doesn’t hold or at least look back and make sure a door like that doesn’t hit the person coming in behind them?”