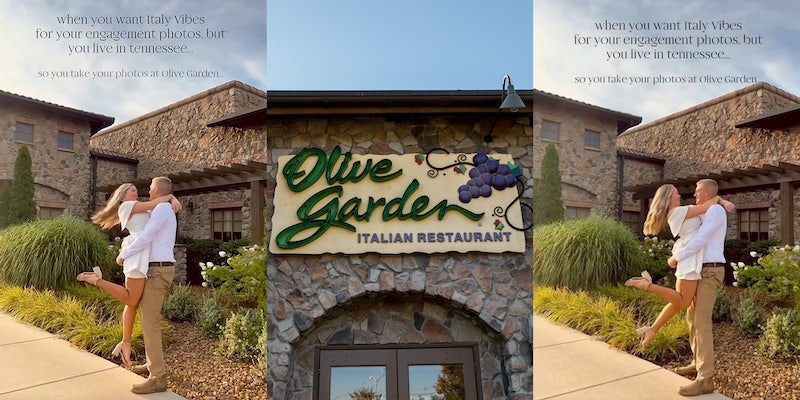 ‘Imagine pulling up to eat unlimited breadsticks and seeing this’: Tennessee couple wanted ‘Italy vibes’ for their engagement photo shoot, so they took their photos at a local Olive Garden

'I thought this was an Olive Garden ad.'

A photographer on TikTok is receiving mixed feedback about an engagement photo shoot she did at Olive Garden. The engaged couple chose the location because they wanted “Italy vibes” for the shoot.

The photographer, named Shea Cravens (@hunterlashea) on TikTok, shared some of the photos in a now-viral video captioned, “tennessee but with Italy Vibes.” As of Friday, the video received about 221,000 views on TikTok.

“When you want Italy vibes for your engagement photos, but you live in Tennessee…” the video’s on-screen text says. The couple is seen posing in various spots outside an Olive Garden restaurant.

Some viewers said they weren’t fooled by the fake Italy vibes and immediately recognized the Olive Garden vibes.

“I’m sorry but I literally knew instantly. I thought this was an Olive Garden ad,” one viewer commented.

“I’m ashamed that I knew immediately it was an Olive Garden,” a second viewer commented.

A third commented, “Ok but as someone who loves Olive Garden I knew immediately.”

Some viewers questioned the decision to shoot at Olive Garden.

“Just because you CAN doesn’t always mean you SHOULD,” one user said.

“There was noooo other option? A brick building? A field?” another user asked. In reply to the comment, the photographer wrote, “definitely other options but we wanted something that we hadnt ever seen anyone do!”

One TikToker stitched the video, “Imagine pulling up to eat unlimited breadsticks and seeing this.”

Another TikToker commented, “I just picture staff coming out and asking ‘so uh what cha doing.'”

In reply to the comment, the photographer clarified that they shot the photos at 6 a.m. to avoid disturbing anyone.

Some viewers reassured the photographer that her photos were “gorgeous,” saying to ignore the “haters.”

“These pictures look great though. If it works it works,” one of those viewers said.

“No this looks gorgeous / don’t listen to the haters,” another commented.