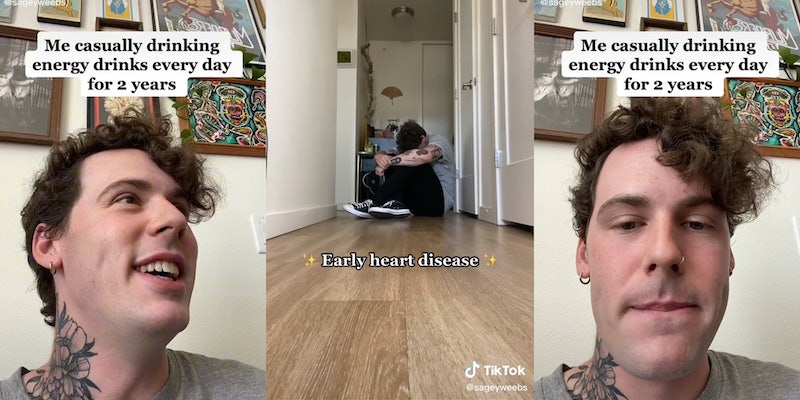 'A cardiologist I worked with called it cardiac death in a can. I never drank an energy drink after that.'

Energy drinks are a popular alternative to coffee and other caffeinated beverages for many individuals. However, Hannah Drake of the Heart Foundation shared the risks associated with energy drinks after a TikToker alleged he developed heart disease from them.

The video, which was posted by @theheartfoundation on July 22 and accumulated over 3.5 million views, opens up with a snippet from another TikTok by the user @sageyweebs. It shows an overlay “me casually drinking energy drinks every day for two years” and then it quickly transitions to the TikToker sitting on the floor looking dejected, with a caption suggesting he developed early heart disease from consuming the beverages.

While the original TikTok looks to be comedic in nature, Hannah quickly explains that the risks associated with energy drinks are no joke: “People want to know, is this real? Can it actually happen? I hate to be the bearer of bad news, but yes”.

She then points to the lack of oversight when it comes to energy drink contents: “The very first thing that we need to recognize is that energy drinks are considered dietary supplements which means that their ingredients are not monitored by the FDA. That includes their caffeine content which can range anywhere from 80 to over 315 milligrams per serving.”

She continues, “In fact, consumption of energy drinks has been linked to higher blood pressure and irregular heart rates. A specific example is atrial fibrillation which is a type of arrhythmia. It can lead to blood clots and increase your risk of stroke and heart failure”.

According to Singh, “studies show that more than 400 milligrams of caffeine excess per day leads to high systolic blood pressure and a fast heart rate.” He warns that “over time this causes an enlarged heart and a dangerous heart rhythm called QT prolongation,” which is linked to sudden cardiac death.

The two videos prompted users to share their thoughts in the comments.

“A cardiologist I worked with called it cardiac death in a can. I never drank an energy drink after that.” another commenter pointed out.

A third said, “They need to ban all energy drinks”.

The Daily Dot reached out to @drjaysonisfresh and @sageyweebs via both TikTok comment and Instagram as well as to @theheartfoundation via email.