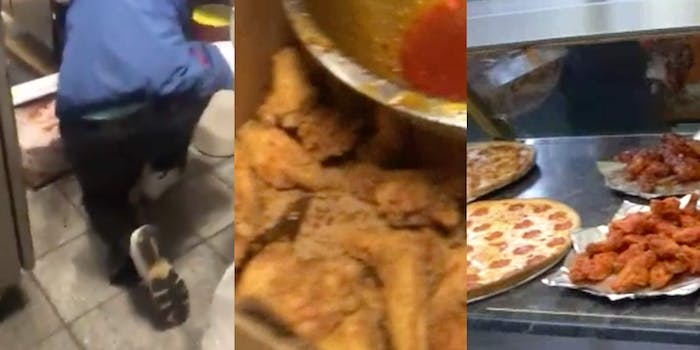 Employee says he was fired over viral chicken wing video

A man in Syracuse, New York, says he was fired after sharing a video with his manager of fellow employees mishandling chicken wings.

In the video, you can see an employee hunched over a box of chicken wings on the ground. The man recording, Matthew Grady, can be heard saying “throw those wings in the garbage they’ve been on the ground.” Another employee responded by saying, “at least rinse them.”

A former employee of a local pizzeria sent us this video of what seems to show another employee picking up raw chicken from the kitchen floor.

While there has been a lot of back and forth about who is at fault, employee and owner agree the wings were rinsed & served to customers pic.twitter.com/j9ms2Y5DbS

“Like 400 wings dropped on the ground. They’re like nah I’m going to pick these up and use them. So they picked them up, washed them, used them, fried them,” Grady told Spectrum News.

This mishandling happened at Key Pizza. The pizza shop’s owner, Sarfraz Mann, told Spectrum News he does not approve of how his employees handled the situation.

“I would’ve made them throw them away,” Mann said. “He could’ve been handled a better way, but it wasn’t because they were doing their thing.”

Though Mann told Spectrum News that Key Pizza has passed its health inspections, and this video should not reflect the status of his restaurant, employees said there are more health concerns. They say a tray used to stretch pizza dough is sitting on a trash can in the video, too.

Mann told Spectrum News though he has strict guidelines on how his business is run, employees don’t always run the restaurant up to standards. Mann says when they get busy, things might get mishandled.

“There’s no violations,” Mann told Spectrum News. “When you got 20 tickets going, when you’re running on, that’s when you get caught.”

The State Department of Agriculture and Markets, which inspects Key Pizza, told Spectrum News that it’s regularly visited the pizzeria since it opened in 2013. The department said they visited Friday, and no critical violations were found.