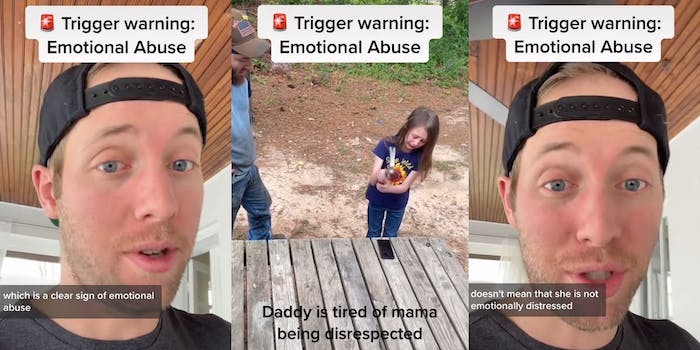 ‘She is being forced to do something that she would never on her own do’: Dad called out for ‘emotional abuse’ in viral TikTok, sparking debate

'It’s not ever okay to humiliate and emotionally destroy a human.'

Different generations have different ideas on what “acceptable” child-rearing looks like. For some parents, there’s a fine line between ensuring your kid learns personal accountability and abuse.

As Jon Fogel, a parenting blogger and social media influencer with over 192,000 followers, pointed out in a now-viral TikTok, abuse can take on many different forms. In one particular clip, posted to the @wholeparent account, Jon stitched a video response to footage of a father “teaching” his daughter to act more respectfully toward her mother.

The punishment in question? The father had the young girl take a hammer to her cell phone. She cries as she destroys the device. As the original clip seems to have since been deleted, its authenticity can not be verified, but commenters found value in the conversation it sparked on TikTok.

Jon stated that while the father in question isn’t spanking his daughter, or necessarily using foul or demeaning language, he alleges that this is a clear-cut case of emotional abuse. As of Sunday afternoon, the clip has 4.8 million views.

@wholeparent #stitch we have to think about the far reaching implications of our punishment. When we psychologically punish like this we don’t just hurt them in the moment we give them a lifelong wound. #emotionalabuseaware #abusiveparenting #parenting101 #kidbrainbasics ♬ original sound – Jon Fogel

Jon says in the clip: “So I talk a lot about physical abuse on this channel and the effects it has on kids and why its ineffective as a discipline strategy and the long term side effects…but every once in a while I will come across a video like this which is a clear sign of emotional abuse. And the interesting thing is if you read books like Childhood Disrupted you’ll learn that physical abuse and emotional abuse have almost the same effect on the brain.”

“And we have to think seriously about what kind of message that sends. Developmental damage aside, what’s the intended goal? Do we want little girls to grow up thinking that men can make them do things they don’t wanna do? Hitting your kid is not the only way to abuse them. We need to be better,” he concluded.

According to Cactn.org, more than 700,000 children are consistently abused in the United States every single year, and over 3 million children experience at least one instance of abuse annually.

Child Protective Services’ definition of emotional/psychological abuse is broad: “Emotional Neglect: failure to provide the support or affection necessary to a child’s psychological and social development. Failure on the part of the parent to provide the praise, nurturance, love, or security essential to the child’s development of a sound and healthy personality may constitute emotional neglect.”

Social workers are required to view allegations of abuse on a case-by-case basis to see if this definition is satisfied. While there are many cases where it’s necessary to remove children from the care of abusive guardians, there is also a litany of adverse side effects associated with separating children from their parents.

Whenever the subject of child abuse and disciplining children comes up in the media, the conversation inevitably heads into “old school v.s. soft” styles of parenting, which is exactly what happened in the comments section of Jon’s viral TikTok.

One user wrote, “This page is for snow flakes look he is letting her know she can’t be disrespectful to her mom nor her dad so I agree with the lesson…”

Another penned that there is a distinct difference between disciplining one’s children and abusing them, “Why does ‘don’t abuse children’ always result in people immediately thinking that we are saying ‘never discipline your children’?”

There are plenty of free resources and methods available to parents and guardians for how to effectively shape a child’s behavior when they step out of line that doesn’t involve abuse. A recurring theme throughout many of them, however, suggests a kind of “third person” approach. Namely, those rearing children are encouraged to work situationally and navigate their discipline in a way that frames to their child that their inability to correct their behavior is harming a situation.

One user who responded to Jon’s video stated that they were a former CPS worker and said that the original video showing the father forcing his daughter to take a hammer to the smartphone is a clear-cut sign of abuse.

“Former CPS worker. There’s so much wrong here, but the fact that he posted it on social media with the intention of humiliation is what does it for me.”

The Daily Dot has reached out to Jon Fogel for further comment on this story.