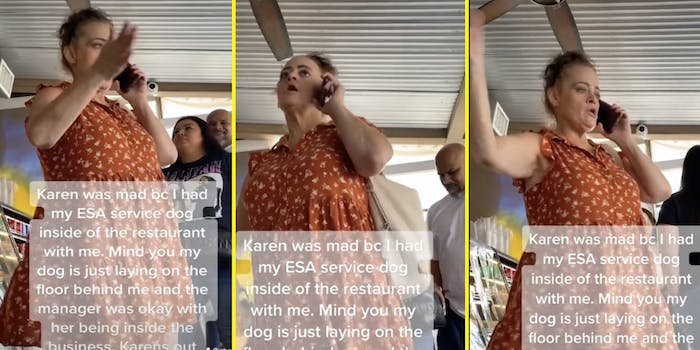 'This dog should not be in a public place.'

A TikToker captured a Karen in a restaurant line, loudly complaining on the phone about the presence of a service dog belonging to the TikToker. The TikTok has gone viral, in part thanks to redditors voicing their disbelief on the TikToker’s behalf.

The video came courtesy of the @chaoticqxeen TikTok account and captured the Karen complaining about her dog. As the on-screen caption noted, “Karen was mad bc I had my ESA service dog inside of the restaurant with me. Mind you my dog is just laying on the floor behind me and the manager was okay with her being inside the business.”

She then added, “Karens out here getting outta hand.”

The video has captured more than 612,000 views since going up on the platform just over two weeks ago.

It starts with the Karen on the phone for all to hear, waving her arm around and rolling her eyes, discussing how most companion animals for people with disabilities need to be “trained to do something,” whereas an emotional support animal “just has to provide emotional support.”

According to the American Kennel Club, “To legally be considered an emotional support dog, also called an emotional support animal (ESA), the pet needs to be prescribed by a licensed mental health professional to a person with a disabling mental illness. A therapist, psychologist, or psychiatrist must determine that the presence of the animal is needed for the mental health of the patient.”

The site does also note that “ESA users do not receive the same accommodations as service dog users,” and that the Americans with Disabilities Act “defines service animals as ‘dogs that are individually trained to do work or perform tasks for people with disabilities,'” and excludes ESAs from this classification.”

However, the Karen took this information to mean that she should either call animal control or the police on the TikToker for daring to have a dog in a restaurant. “This dog should not be in a public place!” she declared.

She then ranted further, calling the dog’s presence “unreasonable” and periodically punctuating her indignation with very audible thigh slaps.

Though the video focused mostly on the Karen, it did occasionally pan over to the people behind her in line. Judging from their expressions, one might conclude that the Karen’s loud phone ranting was more disruptive to their experience than the presence of a dog lying next to its owner.

Though the TikToker had comments turned off, redditors had a conversation about what was in the video via the r/PublicFreakout subreddit on Reddit—a reliable source for Karen content.

More than one commenter noticed the thigh slapping right off, with one remarking, “Her thigh needs an emotional support animal.”

“She slapped her thigh 27 times in that short time,” another said, apparently counting throughout the approximately 90-second video. “Maybe I didn’t count correctly but I really don’t want to watch it again.”

The redditor then moved on to her concern, asking, “Call animal control? Over a super calm dog? It isn’t up to her. It’s up to the people running the business and local/state laws.”

Considering the comments that the Karen could use an animal in her life, one pointed out, “Don’t subject an animal to her. That’s abuse.”

“I thought the same thing,” another redditor agreed, observing, “Man, her thigh must be red from all her slapping.”

“Imagine being disturbed by a dog just chilling out?” that Redditor added. “Get a life.”

The Daily Dot has reached out TikToker @chaoticqxeen for comment.