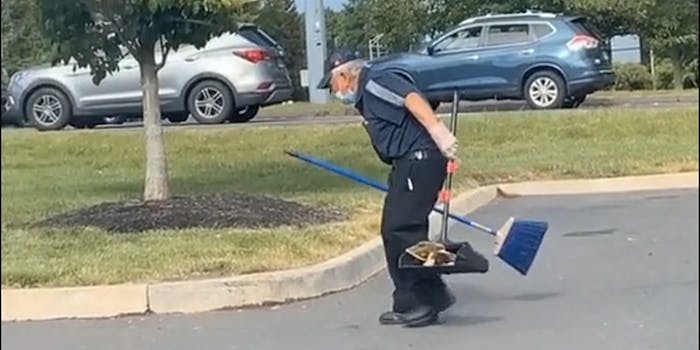 ‘This is the world that we live in’: Viral TikTok of elderly McDonald’s worker sparks outrage

There's now a GoFundMe for the worker.

A viral TikTok video has sparked outrage after it showed a senior citizen seemingly struggling to work at McDonald’s.

The worker’s name is Gregorio, who a concerned patron discovered sweeping the Connecticut fast-food restaurant’s grounds in the summer heat. But with her help, the gentlemen gained support from fans all over.

Filmed and posted by @kandykaine92, with over 2.2 million views, the video shows Gregorio working in the sun.

“I’m at the McDonald’s in Bloomfield, Connecticut,” she says, filming the working senior citizen in early June. “A young man took my order and my payment. A young woman served my food. Another young woman came outside to serve people that were doing pickup. I go to my car, and I see this man, outside, in this weather, sweeping this parking, while these three inside, in the AC.”

“This man has no water, no food, no one is out here watching him. He’s obviously elderly; he’s at least 70 years old. He can’t stand up straight. He’s struggling. You’re telling me people can’t have consideration and help this man? He deserves a fucking raise; he deserves a gold medal.”

For many, the video shows a senior citizen who lacks the funds to stop working and is unable to retire. User @heyluve_its_nique wrote, “This is the world that we live in where elderly ppl like him have to work bc they probably don’t make enough from retirement to survive.”

“He should be inside, not out in the heat like that; that is just wrong on so many levels,” wrote @savannascholten.

@indigoettin07 was among the few who questioned the TikToker’s video and her motives. “This woman put him on TikTok without asking him if she could film or if he was ok with what he was doing,” they wrote.

However, @kandykanie92 said she got to know Gregorio and his family. While Gregorio shouldn’t have to rely on the personal kindness of others to be able to retire at his age, @kandykanie92 even started a GoFundMe for him. In the caption, she wrote: “Sadly, his wife died due to COVID last year. This GoFundMe is to help him retire! Anything you can give help.”

The final video shows Gregorio thanking supporters and those who contributed to the fundraiser.

The Daily Dot has reached out to @kandykaine92.