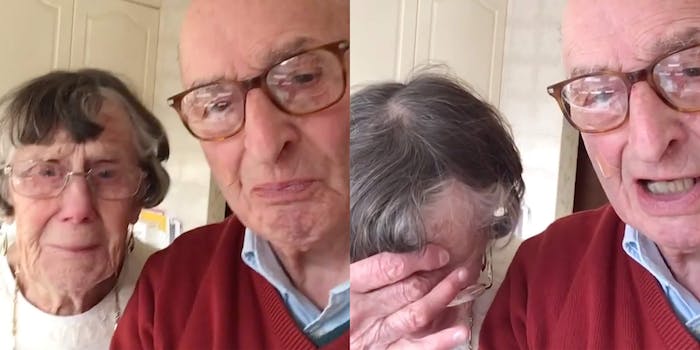 An elderly U.K. couple with more than 111,000 Instagram followers posted a tearful plea on Saturday asking for the safe return of a stolen purse.

In the video, Geoffrey Walker explains that while his wife Pauline was out shopping in Coalville, England, someone reached among her bags and stole her handbag. He says that while the bank has assured them that the bank has frozen the credit cards, they would still very much like the bag back.

“She’s very upset,” Walker explains. “The money will be gone but she’d very much like the purse back. Love to everybody.”

At his side, Pauline Walker is visibly upset and crying.

“This old man I know always posts instas of his wife and they’re so sweet bless him,” @LaurenSkell wrote.

This old man I know always posts insta's of his wife and they're so sweet bless him😂😭 pic.twitter.com/CiyaWG8pa7

An image of Pauline Walker uploaded on Monday indicated they’re trying to move past the tragedy of the lost purse.

“We have now moved on and back to normal,” the caption said. “We have had over 3,000 [messages] of goodwill. Unfortunately we have not been able to read or acknowledge them all.”

We have now moved on and back to normal. Well almost as we are appearing on ITV at 10 o’clock in the morning. We have had over 3000 message of goodwill. unfortunately we have not been able to read or acknowledge them all. Thank you for your support and kindness towards Pauline #ilovethatgirl