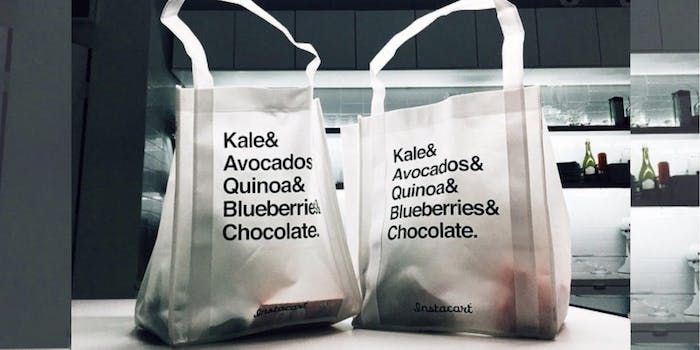 There's a dark side to one man's feel-good story.

This week, Instacart enjoyed a bit of feel-good press thanks to a worker who credits his 300-pound weight loss journey to his job shopping for and delivering groceries via the app.

In an interview with Good Morning America on Tuesday, Chicago Instacart Shopper Antonio Martinez said he used the time spent on his feet and the grocery lists of healthy customers to strike a balance between work and exercise. By shopping for customers, Martinez said he also learned about healthier food options and where to buy them, as well as what the results of consistently eating healthier could look like.

“If I delivered (their grocery store order) and the customer was really fit, I would be like, ‘OK, what are they eating?’” Martinez said to Good Morning America. “It helped me learn a cleaner lifestyle just by mirroring what other people ordered.”

Martinez’s is an undeniable feel-good story, but it comes on the heels of comparatively darker news about Instacart. According to a July Eater story, the grocery shopping and delivery platform used tips to subsidize pay, forcing its workers (which Instacart and other gig platforms continue to fight to treat and pay as contractors instead of employees) to take low-paying deliveries and putting their safety at risk by hiding delivery addresses. Instacart was among a handful of similar startups using this method to stiff workers of tips.  Over a month later, Recode says Doordash still hasn’t changed its tipping policy, despite a tweet from CEO Tony Xu which claimed that Doordash workers would receive their tips without subsidizing pay.

4/ Going forward, we’re changing our model – the new model will ensure that Dashers’ earnings will increase by the exact amount a customer tips on every order. We’ll have specific details in the coming days.

The root of the problem is that delivery workers for these apps are categorized as contractors, and most of the companies behind these apps will not recognize their employees as full-time laborers. Just last year, GrubHub was sued for not paying a minimum wage or overtime. According to Reuters, the lawsuit ruling was in GrubHub’s favor:  Its employees remain independent contractors, without the rights of traditional employees like health insurance and sick days.

While Instacart has not specifically marketed Martinez’s weight loss story as an example of how its working conditions benefit shoppers, Amazon did exactly that last year. In December 2018, the 100-pound weight loss of an Amazon Flex delivery woman was touted as a benefit of the job, rather than an indication of labor intensity. Online, the marketing move received heavy criticism for “masking labor for wellness by an organization known to treat its workers poorly.” Recently, Amazon Flex came under fire for its worker conditions and poor pay.

Not all positive news about Instacart belongs on a fluffy morning news segment, however.  Venture Beat reports that Instacart has promised enhanced employee benefits to its workers, such as access to Care.com childcare, insurance, and student debt assistance. While the announcement certainly doesn’t have the same intrigue as a massive weight loss story, it’s how companies like Instacart change to meet their workers’ needs on a wider scale that will determine their long-term ethical standing.