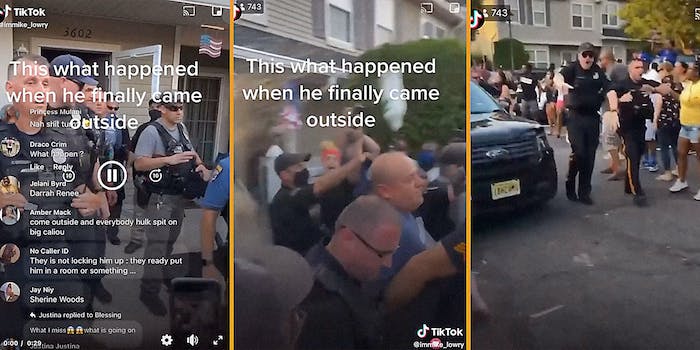 ‘He said to pull up. We pulled up’: Protesters show up at house of man who called Black neighbor N-word in viral video

He was hit in the head with a Black Lives Matter flag.

Edward Cagney Mathews, a resident of Mount Laurel, New Jersey, went viral this week after yelling anti-Black slurs at his neighbors in front of local police officers. A new video shows Mathews is being led away by Mount Laurel police after contending with a massive crowd of protesters and being hit over the head with a Black Lives Matter flag.

In the initial video, Mathews harasses a mixed-race couple and calls them the N-word and “monkeys.” Mount Laurel police eventually charged Mathews with harassment. Amid the interaction, he calls out his address: “3602 Gramercy Way, that’s where I live. Come fucking see me.”

It’s obvious that he didn’t think this through; locals did take up his invitation and come to see him.

The TikTok video posted by @immike_lowry shows police leading Mathews from his home as he ducks his head. Protesters scream throw food and water bottles toward him as police move him into a police vehicle. As he’s escorted away, though, he’s hit on the head with a Black Lives Matter flag.

“It was a difficult situation to extract him,” Mt. Laurel Police Chief Steve Riedner told ABC 6. “Unfortunately, some in the crowd made it more dangerous for everybody.”

ABC 6 reports that Mathews is in jail on assault charges and will be arraigned later this week.

“He said to pull up. We pulled up,” Aliya Robinson, 43, who lives near Mathews, told the Philadelphia Inquirer. “We’re not going to tolerate this anymore.”

He’s been accused of racially targeting and harassing Black people since 2017. The Inquirer reports that one neighbor said Mathews had been a problem since “two years ago” and that he’s “been harassing ever since.”

Before he was led away by police, Mathews said he was apologetic for his destructive words and actions. However, his racism was highlighted in several neighbor complaints and videos.

“There is nothing I’m going to be able to say that’s going to justify me using the words that I used,” he told WPVI-TV. “Whatever I have to do to make it up to the community, and the world at this point, seeing how big it is, understand that I made a mistake, allow me the ability to move forward, just like we all deserve.”