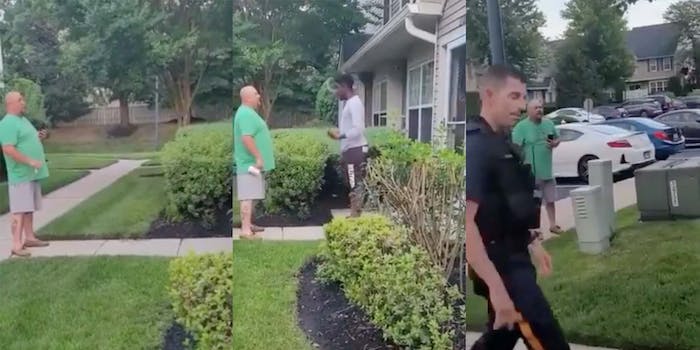 Video shows racist man yelling N-word at his Black neighbor—cop tells him to ‘just cut it out, dude’

It's not the first time he has harassed his neighbors.

According to New Jersey’s Mount Laurel Police Department, a complaint relating to the harassment shown in the video was filed on July 2. The video was posted to Reddit on Sunday.

In the video, Mathews, 45, shouts at a Black man standing outside his own house. The man’s family watches from inside the house. Mathews calls the man, who is Black, a “monkey” and the N-word and asserts that his actions are permissible because he is on “public grounds.”

Later in the video, a white Mount Laurel police officer arrives at the scene. He tells Mathews to return to his home and that they’ll talk “later,” then attempts to talk with the neighbors that Mathews yelled at.

When Mathews refers to his Black neighbor as the N-word in front of him, the officer says, “Just cut it out, dude.”

The Mount Laurel Police Department wrote on Facebook that Mathews was charged with harassment and biased intimidation.

According to Facebook posts from a former neighbor of Mathews, it’s not the first time he has harassed his Mount Laurel neighbors.

In a video posted by a former neighbor, Mathews is seen telling her he sells drugs and that because the police are his “people,” she won’t “get any help from the cops.”

The same neighbor who posted the video of Mathews threatening her on the stairs alleges that although he kicked in her door, damaged her car, and filed false complaints against her, she received no help from the Mount Laurel Police Department.

The Mount Laurel Police Department and multiple Mount Laurel residents did not immediately respond to the Daily Dot’s request for comments.