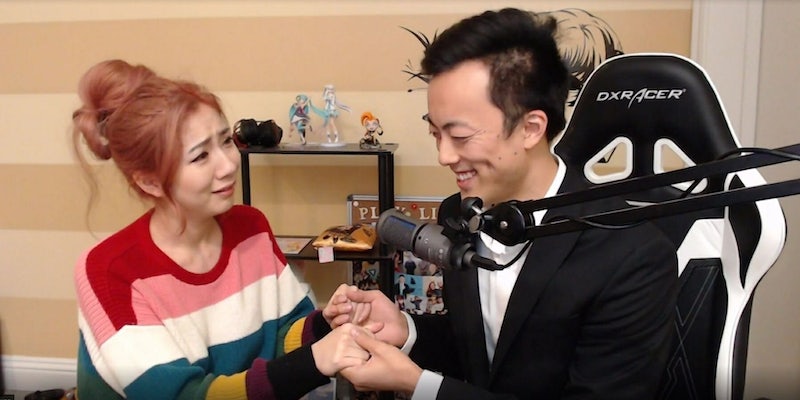 Just as he was about to set a new world record for the number of minutes streamed in a month, Twitch user Edison Park had a more permanent celebration in mind.

At the end of his 30-day run where he averaged about 18 hours of live streaming a day, Park turned to his girlfriend, Leslie Fu, and asked her to marry him. Talk about making the audience wait forever for a romantic ending.

Last month, Park—who has more than 52,000 Twitch followers—set out to break the record that was owned by Zizaran, who streamed for 506.5 hours in a 30-day span earlier this year. Park decimated that mark, finishing at 541 hours for the month.

Afterward, Park, with Fu by his side, took her hand in his and almost immediately began to cry. With a shaky voice, he said, “I can’t imagine being with anybody else. So, Leslie, in here, I have my mom’s ring that she got from my dad when he proposed to her. And so, Leslie, will you marry me?”

Turns out, he was serious and was not trolling her.

You might not have heard her response in the video embedded above, but Fu made her answer quite clear on Twitter.

I SAID YES!!!!!!!!! I literally thought he was trolling me all the way up until I saw the actual ring. My heart is so filled with love and I'm truly the happiest girl in the entire world right now T__T @edisonparklive is officially my fiancé. It still feels like I'm dreaming.. pic.twitter.com/JPt4gucWTe

Aside from the well wishes, redditors enjoyed the fact Park placed the microphone near her lips when she began answering him with the first “Are you serious?”

Wrote one commenter, “The fact that even in that emotional moment he thought of moving the microphone closer to her mouth to ensure chat has a good audio experience. What a professional.”

People also noticed the Rubik’s Cube design on the box that housed the engagement ring. As Fu explained on Reddit, they worked together on Rubik’s Cubes early in their relationship, and after a few months of dating, he presented her with a ring box that was painted to resemble a partially finished Rubik’s Cube.

“He explained that it was partially solved to represent our relationship just getting started and that one day he hoped to have it fully solved,” she wrote. “He then opened it and inside was the tissue paper ring that I g[ave] him three months back and he asked me to officially be his girlfriend.”

Three years later, at the end of an extreme amount of streaming (and after he had previously taken the ring box from her apartment without her knowledge), he painted the rest of the box to prepare for his big question.

“I AM ENGAGED TO THE BEST GUY EVER WHO ACTS LIKE THE LEAST ROMANTIC PERSON IN THE WORLD BUT THEN DOES THINGS LIKE THIS,” she wrote.

Amid all of Twitch’s issues that include NSFW streams, too many “pervs,” and one streamer telling his girlfriend about his cheating ways, Park and Fu proved that Twitch can actually be the host of a love story that ends in triumph.