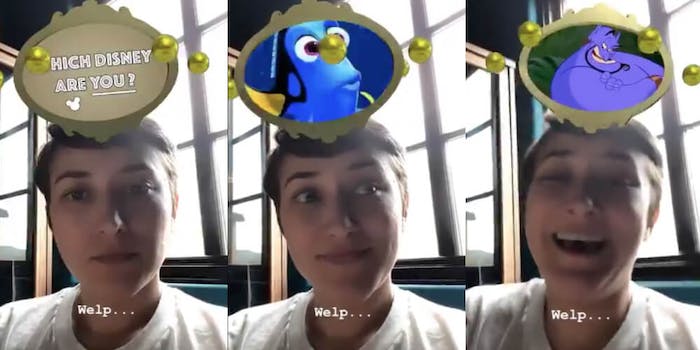 A new filter on Instagram is going viral for letting users see which Disney character they are.

Created by Instagram user Arno Partissimo, the filter is producing a wide range of reactions from Disney fans online.

The filter works by simply scanning a user’s face before landing on a random Disney character. And while some of the filter’s decisions seem to make sense, others have left users scratching their heads.

Videos of people reacting to their designated Disney characters are making the rounds on social media sites, like Twitter.

In perhaps the most wholesome and heart-warming case, Zelda Williams, daughter of late legendary actor Robin Williams, was matched up with none other than her father’s character from Aladdin.

A clearly shook Williams posted the video to Twitter with the caption, “Y’all…”

Other users were generally happy when matched with lovable characters like The Lion King‘s Simba.

Thought I’d try out the which Disney character are you filter pic.twitter.com/LbLKmSSPxJ

But others were less than thrilled and even low key offended when compared to characters like The Lion King’s Pumbaa and the Hunchback of Notre Dame.

Some half-jokingly accused the filter of being racist for repeatedly matching them up with Chinese character Mulan.

“Y’all got me so fucked up,” one user wrote.

The which disney character filter on instagram is cyber bullying me pic.twitter.com/dMwLG2UhVO

my bf tried the disney filter on instagram and pic.twitter.com/A69WjpTjcg

Y’all got me so fucked up pic.twitter.com/hnWzdVNSUn

The viral sensation also produced a few hilarious and profanity-laced tirades as well.

I had my dad do it and I- pic.twitter.com/UMVRDqzqsI

Those with Instagram accounts looking to try out the Disney filter can do so searching under the “Browse Effects” option listed among their face filters.