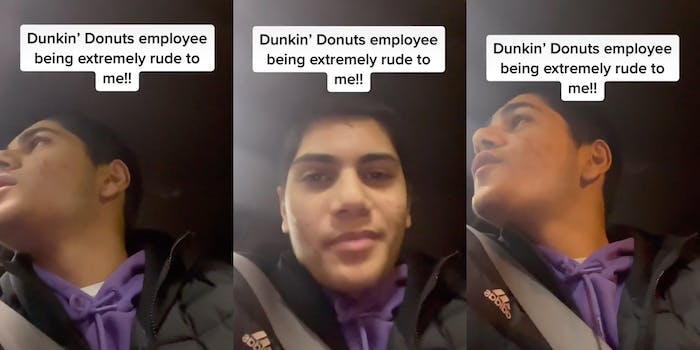 ‘I’m going to need you to calm down before I get your a** fired’: Dunkin’ worker curses out TikToker trying to pick up DoorDash order

'This stupid idiot comes to the f*cking window and doesn’t want to order...'

Viral TikTok footage shows a heated verbal exchange between a TikToker and an alleged Dunkin’ employee.

Ricardo Baaklini (@ricardobaaklini) said the altercation began when he skipped the intercom at a Dunkin’ drive thru and drove straight to the window to pick up a DoorDash order. The Dunkin’ employee seemed to lose it, yelling angrily at Baaklini.

As of Tuesday, the video, which only shows Baaklini’s face during the interaction, reached nearly 600,000 views.

“@Dunkin’ THIS YOUR EMPLOYEE?” Baaklini captioned the TikTok video.

The footage starts during the argument, with the alleged Dunkin’ employee shouting somewhat unintelligibly. Meanwhile, Baaklini repeatedly asked what her name was.

The employee went on to say that she wasn’t afraid of Baaklini, who in return pointed out that she “decided to be rude” to him. He tried to repeat back what she had said to him, but she cut him off.

“What I said was ‘this stupid idiot comes to the fucking window and doesn’t want to order and wants to be lazy,’” she said. “So I said ‘take a lap and go back to the intercom.’ That’s what I fucking said.”

After that, the employee seemed to get fed up and asked Baaklini if he was going to order or not. He told her that he wasn’t because he had a DoorDash order. The employee then went on another rant about the intercom versus the window.

“Alright, I’m going to need you to calm down before I get your ass fired tomorrow,” Baaklini said.

The Dunkin’ employee exploded again, and the two got into another argument with Baaklini just saying “I don’t care” repeatedly. Then he seemed to become more frustrated, after being relatively calm until that point.

“Look at your blonde ass. You got black roots, dickhead,” Baaklini said. “Look at your hair, bitch. You’re fucking chopped as hell.”

Another employee came to the window and gave Baaklini his DoorDash order, telling him she just needed to make the drinks.

The first Dunkin’ employee can be heard saying something, although she sounded farther away. Baaklini fired back at her, and they continued the argument, talking over each other.

After Baaklini got the drinks for his order, he seemed to drive away.

The argument had TikTok viewers mostly siding with Baaklini.

“He was being respectful n she came crazy for no reason,” one viewer commented on the video.

“She’s mad that he was doing the job right. Why he gotta tell the intercom about DoorDash when he is supposed to show up the window to pick up an order,” another viewer said.

Other viewers were amused by Baaklini’s comebacks during the argument, particularly the ones about the employee’s hair.

“your comebacks were funny af so you won lol,” one user commented.

Several viewers tagged Dunkin’ Donuts’ TikTok account, urging the company to fire the employee and do better in the future.

The TikToker and Dunkin’ did not immediately respond to the Daily Dot’s request for comment.