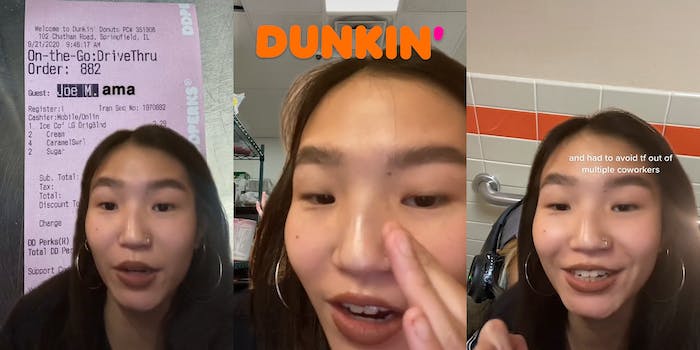 ‘Our cook had child pornography charges’: Former Dunkin’ worker says drinks are ‘sh*t’ at Dunkin’ because no one gets trained

'Even the experienced people don't know how to make certain [drinks.]'

Sometimes, the best thing about leaving a job you hate is getting to dish on how terrible it was — a tradition TikTokers have taken to the next level by making the ‘tea,’ aka gossip, public. And now one creator, in particular, is calling out Dunkin’ for the experience she allegedly had as an employee.

TikToker @milfmagic shared photos of her working at the popular coffee franchise in a viral video, with the images suggesting she worked at a location in Springfield, Illinois.

“I worked at Dunkin’ Donuts during like, peak pandemic, and I’m just ready to talk my shit,” she says. “I got fired for saying ‘fuck cops’ during the [Black Lives Matter] movement.”

The TikToker tells viewers that the drinks are allegedly “shit” because the staff doesn’t receive proper training.

“My first day was on the floor, making fucking drinks,” she says. “The machines are easy but even the experienced people don’t know how to make certain shit.”

The former employee also claims that her store never gave workers breaks, something that is illegal in Illinois for employees working 7.5 hours or more, though it’s also something Dunkin’ has been accused of elsewhere in the past.

“They are so desperate for people, especially during the pandemic, obviously, that they would hire anyone. Our cook had child pornography charges and had just gotten out of jail,” she continues. “I was freshly 18 at the time that I worked here and so was my manager. Like, the store manager.”

Viewers commiserated with the creator’s experience, including those who claimed to have worked at Dunkin’ in the past themselves.

“I was legit not trained they had me play a video game to train me & they gave me all the cheats,” wrote @minjossy88. “I was alone for 8 hrs on my 1st day with no training.”

“My store didn’t even have a manager during night shifts,” another wrote.

Another viewer said as a 17-year-old during the pandemic, she “walked in for an interview and they immediately gave [her] tables.”

The Daily Dot has reached out to @milfmagic via TikTok comment and Dunkin’ via email.