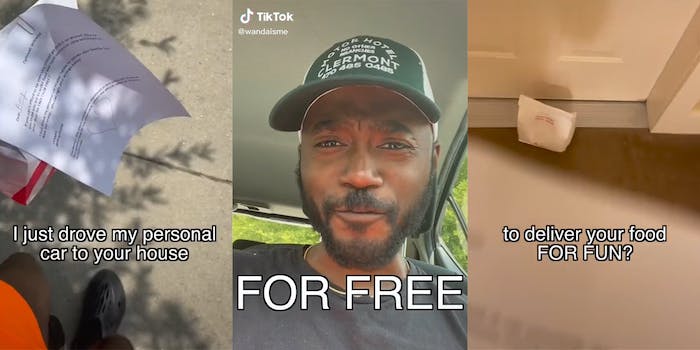 ‘Pick it up yourself’: DoorDash driver accuses customer who didn’t tip of making him work for free, sparking debate (updated)

The driver is getting accused of harassing the customer.

Update 7:24am CT, Aug. 16: According to the New York Post, TikToker @frenchfrythug said in a video posted on Sunday that he did not leave a note at a customer’s door. “Amy is real, she’s a real habitual non-tripper, but I did not leave the note at Amy’s thing,” TikTok user @frenchfrythug reportedly said in the video.

Update 1:37pm CT, Aug. 12: When reached for comment, a DoorDash spokesperson told the Daily Dot in a statement that the company is “looking into this incident and will take appropriate action.”

“This behavior is clearly inappropriate and has no place on the DoorDash platform,” the statement continued.

DoorDash said it works to provide drivers with a clear understanding of how much they will earn for deliveries before they accept them and that dashers are free to decline deliveries.

Initial story: A DoorDash driver called out a customer for failing to tip him and left them his Venmo username so that they could “right (their) wrong.” The controversial video has since been removed.

TikToker @frenchfrythug uploaded the video on Tuesday, and it was viewed more that 335,000 times before being removed from the platform, according to Insider.

The video was not available on Thursday, and the driver’s account was made private.

According to Insider—as well as snippets of the video since posted elsewhere—Fountain ranted about a customer not tipping him and left them a page-long note demanding the tip be sent to @iforgottotip. “If you can’t afford to tip then you should go pick it up yourself,” he wrote in the note, according to Insider.

According to Insider, he referred to the customer as a “habitual no tipper.”

“Who do you think you are to order food and have someone come and bring it to your door for free? For free??” he says in a portion of the video.

“I drove my personal car to your house to deliver your food for fun? Nawwwwww,” he says.

It’s not clear if the note in the video was just to put the customer on blast or was actually intended to garner a tip. The Venmo username for @iforgottotip did not generate any results on Thursday morning when the Daily Dot ran a search for it.

The video did spur a debate among many who felt that while the driver had a right to be upset, his video was a bit excessive.

“You’re also now in the wrong,” said one user in response to the video, adding that now the driver would get bad reviews. “Thats bad business.”

“Fucking get a different job. Like you feel that you picking up six different orders at once, dropping it off where you’re hoping is the correct place – how much do you think thats worth?” said another user. “No bitch you’re fucking harassing your customer.”

The user added that it’s completely normal for people to rant about work but accused him of harassing the customer, not the work.

Another user sided with the driver and said everybody should get experience in retail so that they can garner empathy for those currently working in the field.

This isn’t the first time the driver has put his customers on blast in TikTok videos. In a video shared by another account, the driver appears to be eating a customer’s order after they asked him to stop updating them about the progress of their order.