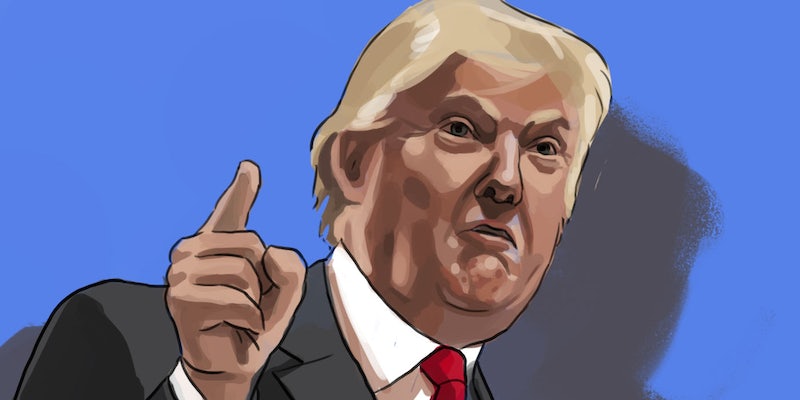 The campaign is pressing charges against the protester for what he did to the guard first.

Donald Trump‘s hostility toward immigrants brought violence to his front door on Thursday—but the violence didn’t come from an immigrant.

A member of Trump’s security team punched a man in the face during a protest outside Trump Tower over the Republican presidential frontrunner’s plan to deport millions of undocumented immigrants and their families.

At the time, Trump was inside his New York City skyscraper announcing his pledge to the Republican National Committee that he would not run as an independent candidate if he failed to secure the party’s nomination in 2016.

Outside, meanwhile, a protester identified by NY1 as Efraín Galicia grabbed the Trump security guard from behind after the guard snatched a sign reading “Trump: Make America Racist Again” away from another protester.

The guard, whom the Daily Caller reports is Trump security director Keith Schiller, then swung around and punched Galicia.

The scuffle comes a little more than a week after Trump’s security team ejected Univision news anchor Jorge Ramos from a press conference after the Mexican-American journalist attempted to ask questions out of turn.

“Sit down, you weren’t called,” Trump told Ramos before his security guard grabbed the journalist by the shirt. “Go back to Univision.”

While Trump leads the 2016 GOP field by an average of 14 points, the Hispanic community has overwhelmingly negative views of him. A recent Gallup poll found that Trump’s net favorability rating among Hispanics was negative 51 percent.

Trump’s campaign told the New York Times on Thursday evening that it would “likely be pressing charges” against Galicia for grabbing their security guard.