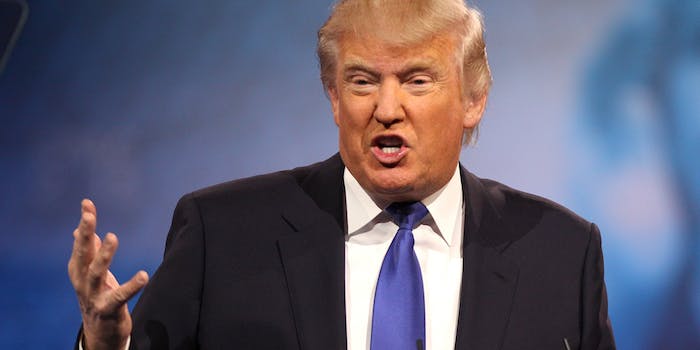 The Republican frontrunner seems to endorse a thoroughly discredited rumor.

Just one month before the first votes are cast in the 2016 Republican presidential primary, businessman and frontrunner Donald Trump is releasing his first television ad—and it goes straight for the jugular.

The ad, which begins airing on Monday and was shared early with the Washington Post, opens with a fiery and direct montage: President Obama, Hillary Clinton, a U.S. warship launching a missile, suspects in the San Bernardino attack, shadows crossing the Mexican border, and Islamic State terrorists.

In 30 seconds, the narrator explains why Trump has taken some of the most polarizing positions of the 2016 campaign.

Trump’s new ad represents a significant escalation in his campaign. But are its claims true?

The voiceover and images carefully avoid making any specific claims, but the strong suggestions are clear enough, thanks to images of the U.S.-Mexico border sandwiched between video of ISIS militants.

However, there’s no evidence to suggest that Islamic State fighters are crossing America’s southern border.

This idea first gained prominence in late 2014 when multiple Republican politicians, including several presidential candidates, began sounding the alarm. Conservative media outlets like Fox News and Breitbart followed suit. Politifact looked at the claim in 2014 and found it to be “mostly false.“

The Department of Homeland Security and the Federal Bureau of Investigation said that there was no truth to the warnings.

Conservative media outlets reported in 2014 on an IS presence in Mexican border cities like Juarez and on an “imminent attack.” The reporting cited anonymous law-enforcement and government sources and quickly went viral. But it was never independently verified, and national-security officials quickly refuted it. It is now deleted without comment on the original website.

Rep. Trent Franks (R-Ariz.), one of the first members of Congress who read the report and raised an alarm about it, later quietly walked back his support for it—though well after it gained massive popularity.

Judging by Trump’s ad, the false narrative seems to have stuck.

Experts inside and outside the federal government say they are more worried that Islamic State terrorists will enter the country on a commercial flight. The San Bernardino shooters included one U.S.-born citizen and one Pakistani immigrant who entered the country legally; neither of them sneaked in through the southern border.

Two weeks ago, Trump suffered one of the more serious stumbles of his campaign. He fell to second in Iowa as his main conservative rival, Sen. Ted Cruz (R-Texas), took the lead. Trump now trails Cruz by four points; voting begins in 29 days.

January is typically one of the most volatile months of a presidential election year. Trump has led almost all nationwide polls since July, and to retain that lead, he is vowing to spend $2 million per week in a months-long ad blitz, with at least six to eight ads in production.

A DHS spokesperson did not respond to a request for comment on Trump’s ad’s ISIS claims.