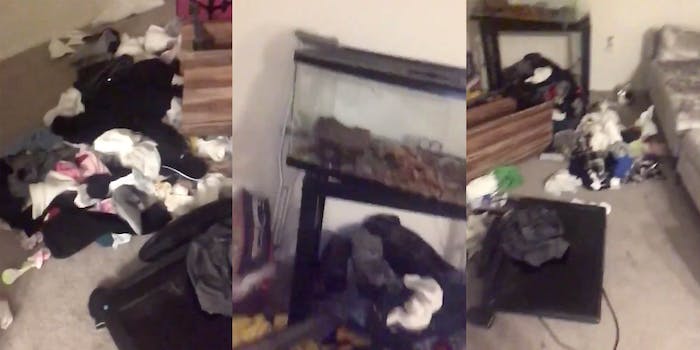 Woman shares aftermath of domestic abuse: ‘This is only to raise awareness’

She doesn't want other women to go through the same thing.

A Twitter user recently shared a video showing the aftermath of a violent altercation with her partner to bring awareness to domestic abuse.

The user, @mesh_alaa, uploaded the painful video to Twitter on Feb. 27. The video shows her bleeding from gashes on her chin and shoulder and attempting to piece her thoughts together.

The raw video, according to her post, is intended to expose the horrors of domestic abuse and start a conversation.

“I don’t usually do this. But a lot of young people in the world say ‘it could never be me.’ I did too,” @mesh_alaa wrote above the video. “This is only to raise awareness. This was the result of not being able to find a wallet. This is all while I have a fractured knee.”

She shared the name of her boyfriend, who she said recently finished beating her. She also revealed a disheveled apartment where broken items, including a terrarium, littered the floor alongside clothes. She listed off the objects her partner threw her into.

In several follow-ups on the thread, @mesh_alaa went into more detail about the aftermath. “I screamed and screamed help throughout the hall while enduring trauma and . . . NO ONE came,” she wrote.

“Again, this is for awareness and to help myself,” she continued. “I do not hate him, I am sad for him. I care deeply for him, and It’s harder to leave these situations when no one knows so I was hoping to gain my own strength by sharing. But I also don’t want any other girls to go through this.”

She also noted that she immediately called for her family’s support but doesn’t live close to her relatives. “I called my mom begging telling her to hurry and of course she came…. but it took an hour,” she said. “I could’ve been dead in that time and that shit scares me so bad.”

After arguments broke out in the comment sections of her video, @mesh_alaa clarified a few points. “I am not one of the confused broads y’all know. This video did not hit the net until actions were taken and I was safe,” she wrote. “This was just the shock of it all after the fact. So stop arguing with these beautiful people coming to my defense and lets all just be cool. “

Aside from a few outlying victim-blamers, commenters flocked to support @mesh_alaa. “I hope you are safe now my love,” one commenter wrote. “Thank you for being brave & sharing.”

@mesh_alaa did not immediately respond to the Daily Dot’s request for comment.