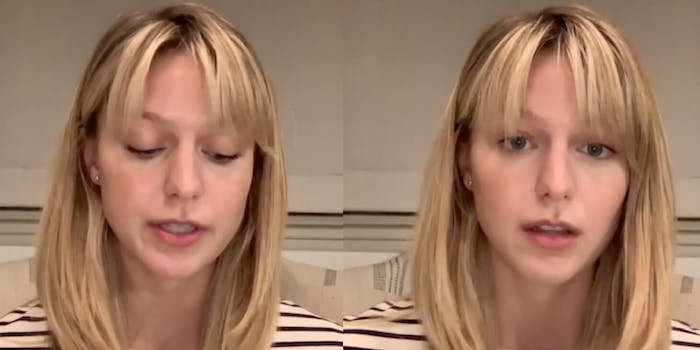 'I learned not to value myself.'

Supergirl star Melissa Benoist posted a video to Instagram on Wednesday to share her emotional experience of surviving domestic abuse.

Benoist said she shared the story on her Instagram so it could “stay her words” without edits. The 31-year-old actress said that in a previous relationship, the abuse began to rear its head in emotional and mental ways before eventually morphing into physical abuse.

She said that she and her abuser were friends at first, before the relationship became romantic. “It’s still hard for me to dissect what I was thinking and feeling that kept me from stopping what felt like a runaway freight train,” she said. “But the most logical deduction I’ve come up with is: I was a child from a non-violent, but broken home.” She said that the “sheer terror of a failed relationship” kept her going through all the doubt, uncertainty, and pain.

Throughout the retelling, Benoist emphasized that she struggled time and again with realizing that it was OK to say “no.” That it was all right to disappoint other people, including her partner, and still be OK. “It didn’t matter that I had misgivings whether he was ‘the one.’ At the time, it felt very good how much he coveted me, how much he seemed to treasure who I was,” Benoist said.

Benoist explained that as the abuse worsened, she began changing her life to appease her unnamed abuser. She turned down auditions, job offers, and even friendships. An ongoing effort to protect her partner, whom she viewed as broken, kept her going through all the questions and red flags.

She said the physical abuse began “about five months” into the relationship. “The violence escalated just as quickly as the relationship had,” she said. “The first time it happened, he threw a smoothie at my face.” She said the first several instances of abuse, she was more concerned with his wellbeing, or surface-level issues like ruining the furniture, rather than her own safety.

“The stark truth is I learned what it felt like to be pinned down and slapped repeatedly, punched so hard the wind was knocked out of me, dragged by my hair across pavement, head-butted, pinched until my skin broke, shoved into a wall so hard the drywall broke, choked,” Benoist said. “I learned to lock myself in rooms, but quickly stopped because the door was inevitably broken down. I learned not to value any of my property, replaceable and irreplaceable. I learned not to value myself.”

Benoist made clear throughout her story that even though she was fully aware that what was happening was wrong, she felt a responsibility to protect her partner.

The long and winding road of healing and reconciliation has brought me to this moment where I feel strong enough to talk about my experience openly, honestly and without shame. By sharing my story, hopefully I can empower others to seek help and extricate themselves from abusive relationships. Everyone deserves to be loved void of violence, fear and physical harm. @futureswithoutviolence

“Most vividly, I remember how the arguments would usually end,” she said, explaining that her abuser always expressed sudden and extreme guilt at what he had done.

But eventually, she said, the abuse crossed a line. A blow to her face from his iPhone caused lasting damage to her eyesight: “The impact tore my iris, nearly ruptured my eyeball, lacerated my skin and broke my nose.” Benoist was forced to visit the hospital, where doctors and police questioned her about the nature of her injury. Benoist and her abuser lied and shared a “transparent story” to the police, she said.

It wasn’t until a friend reached out that she found the strength to finally leave.

“She sat me down and said she wanted to talk about something important, and I immediately knew where it was going,” she said. “She was nervous, shaking, afraid that it would ruin our relationship, but she bravely asked me if I was a victim of domestic violence. It was the first moment I spoke about the abuse to anyone, and I can’t describe the amount of relief and solace I felt. She held me and she said, ‘You know what you have to do now, don’t you?’ ” If not for that brave, wonderful friend, Benoist might still be in that terrible situation.

At the end of the video, Benoist shared that she hoped her story might make a difference to other people in similar situations. “If you are enduring what I went through and you see this, maybe you will find the tiny straw that will break the camel’s back, or at least you might begin to think of your freedom, in which case I am here, ” she said. “I am with you, and you can and deserve to live a violence-free life.”