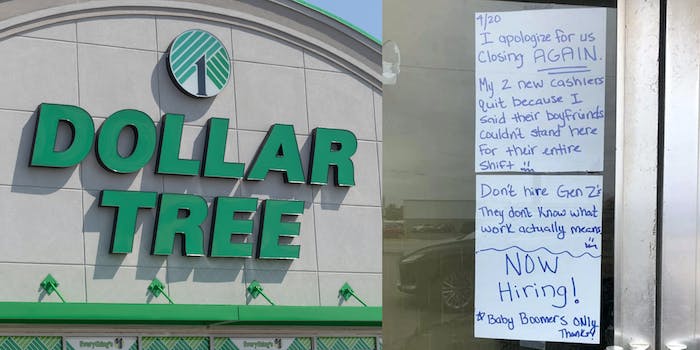 ‘They only want ppl who are desperate and too tired to fight for anything other than poverty wages.'

A Dollar Tree manager in Bremen, Indiana, was reportedly fired after putting up a handwritten sign saying the store would only hire baby boomers. The Pew Research Center defines a “baby boomer” as any person born between 1946 and 1964.

The sign read as follows: “I apologize for us closing AGAIN. My 2 new cashiers quit because I said their boyfriends couldn’t stand here for their entire shift. Don’t hire Gen Z’s. They don’t know what work actually means. NOW HIRING! *Baby Boomers ONLY, thanks!”

Gen Z is defined by the Pew Research Center as any person born between 1997 and 2012.

16 News Now verified that the sign was posted after two young employees quit.

A video of a news report about the sign was later posted to TikTok by user Devon (@servingyoudaily), where it garnered over 117,000 views and sparked intense debate.

After many users alleged that this seemed like age discrimination, TikTokers voiced their theories as to why an employer would only want to hire baby boomers.

“They only want ppl who are desperate and too tired to fight for anything other than poverty wages,” a user speculated.

“Back in their day companies could take advantage of you and people would call it hard work,” another said.

Others said that the high turnover was not the fault of the Gen Z employees the store hired.

“All positions at Dollar Tree are high turn over positions,” one user claimed. “No one is staying there long term.”

In 2019, the Virginian-Pilot reported that Dollar Tree was experiencing such a problem with manager turnover that the company’s annual proxy report tasked CEO Gary Philbin with solving the problem the previous year.

Al-Jazeera also noted that dollar stores like Dollar Tree have notoriously high turnover rates, with the article speculating that numerous wage and hour class action lawsuits filed against Dollar Tree was a sign of employee dissatisfaction (as of 2014, Dollar Tree had 15 cases either ongoing or settled “in recent years,” according to the article).

This feeling is echoed by TikTok commenters.

“I feel like it isn’t laziness,” a user wrote. “I think any dollar type store seems to pay little… low staff and long hours — I wouldn’t want to work there.”