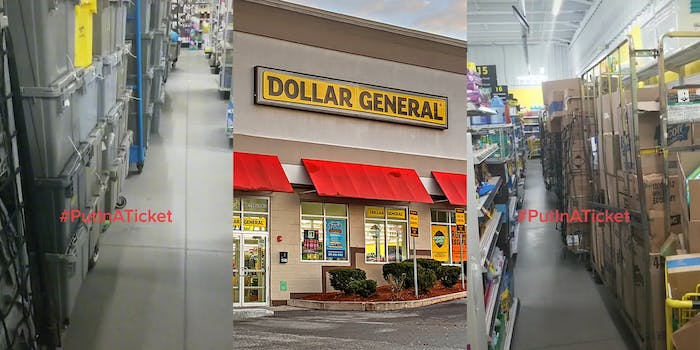 ‘They expect the one employee to do everything’: Customer posts Dollar General sales floor overloaded with stock, sparking debate

'They simply don't pay enough for the people to care.'

A video showing a Dollar General location overloaded with stock has gone viral on TikTok.

The video, posted by user Kelvin (@kjackson008), shows the aisles of a Dollar General location, each one loaded with crate upon crate of packed stock. The TikToker’s video has over 30,000 views at the time of publication.

“This is the Dollar General by my house, and there’s freight everywhere on the sales floor,” Kelvin explains in the video. He later adds, “You can’t even shop!”

In the comments section, TikTokers claimed that this was a relatively common occurrence at Dollar General.

“Every DG I’ve been to in the last 6 months has been this way,” one user wrote. “I’ve stopped going.”

“Same thing in (Kentucky),” another added. “It’s always a mess. They have one employee working at a time.”

“Same in Alabama,” stated a third. “A truck will come in before this one is even put up. They’re all the same.”

“Same here in Tennessee,” an additional viewer shared. “It’s flooded with freight, no workers, only 3 or less and trying to unpack and (only) one ringing up customers.”

However, some theorized that the stores were suffering due to understaffing or insufficient pay.

“They expect the one employee to do everything,” one user wrote.

“Impossible to put away stock and wait on customers and check in vendors when you are the only employee!!” another agreed.

“They simply don’t pay enough for [t]he people to care,” a viewer contributed.

Similarly, a few alleged Dollar General employees chimed in to share the experience from the employee’s perspective.

“We’re trying — we really are,” the user wrote. “We can’t keep up with them sending so much stuff we already have.”

“You have no choice,” another shared. “The back rooms are so small and they don’t give us hours for this to not happen. They work us like slaves.”

Many commenters called upon Dollar General to do something about the state of their stores.

“@dollargeneral hire an overnight crew to stock and recover your stores,” one user said in a highly-rated comment. “This is beyond embarrassing that every store looks like this or worse.”

Dollar General did not immediately respond to Daily Dot’s request for comment via email.