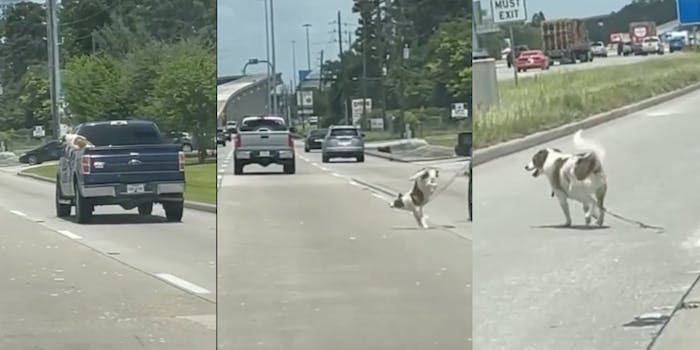 ‘This broke my heart’: Dog jumps out of moving truck in viral TikTok, sparking debate

'Dogs should not be in back of pickups. They are unpredictable.'

A viral TikTok video of a dog jumping out of the back of a pickup truck is sparking a conversation about whether dogs should be allowed in an open, moving vehicle while untethered.

In the short video, a dog is sitting in the back of a Ford truck before jumping out, hitting the ground, and rolling a few times. The dog eventually gets back on its feet and appears to be OK. However, it is now a few lanes away from the truck it jumped out of.

“I had a feeling he was going to jump,” the TikToker who witnessed and filmed the moment captioned the video.

The video was posted on May 11, and it’s been viewed nearly 2 million times since.

For many, the video highlights the dangers of having a dog unsecured in a moving car as they point to it as the reason why “dogs should not be in the back of pickups.”

“They are unpredictable,” one TikToker said.

“This broke my heart,” another commented.

This is not the first time a dog was caught on camera tumbling out of a moving vehicle. In March, a toy poodle named Ginger became a viral sensation after her owner caught the exact moment she jumped out of the window of a moving car. Ginger, thankfully, also came away from the incident also unscathed.