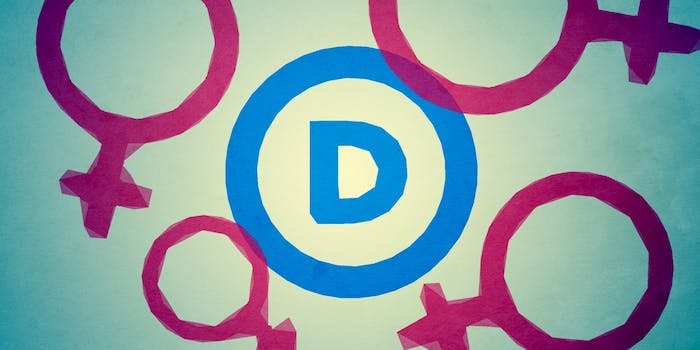 The DNC women's caucus focused on not 'if,' but when Clinton is elected.

The second day of the 2016 Democratic National Convention started with a bang in a giant convention center room packed with women’s rights advocates.

As people filed into the upstairs caucus arena at the Philadelphia Convention Center downtown, they were greeted by nonprofits and issue groups handing out buttons and stickers—and even by a group of women wearing Oculus VR headsets helping to promote an immersive virtual reality film about reproductive health clinics, which we tested on Facebook Live.

On the dais, some of the most powerful women in electoral politics spoke to the diverse crowd of nearly 500 that included many women of color and people with disabilities. Donna Brazile, the interim chair of the Democratic National Committee who will step into the lead seat when Debbie Wasserman Schultz officially resigns at the end of the convention, kicked off the event with a rousing speech that endorsed Hillary Clinton but also offered a jocular message of support for Bernie Sanders.

While the crowd was certainly excited by Brazile’s unexpected appearance at the caucus, lining up for selfies after she descended from the podium, they also listened as she continued a three-day streak of apologizing for the contents of the leaked DNC emails that showed preferential treatment for Clinton.

Bringing the focus back to Clinton’s future as the country’s possible-first-woman president, House Speaker Nancy Pelosi (D-Md.), wearing a rainbow wristband in honor of the LGBT community, took to the stage.

“When we win, we want [Clinton] to have a Congress that does not obstruct, but respects,” Pelosi told the crowd as an ASL interpreter mirrored her words. “Elections are about electing some person, but also about choosing a path. And the path that they are choosing when they elect Hillary Clinton is one that she cannot take unless she has a Congress that is respectful, not obstructive.”

Pelosi’s statement was a clear nod to the “obstructionist” tendencies of Congress during the Obama administration—and the glimmer of hope that Republicans will not try to block Clinton at every turn.

The thread running through all of the speeches at the DNC women’s caucus Tuesday was not whether Hillary Clinton would be elected, but how her administration would fare once in place in the White House.

One departure from the Clinton cheerleading came in the form of a panel moderated by actress Amber Tamblyn that featured fellow actress Lynn Whitfield, Colorado Rep. Crisanta Duran, and Boston City Councilman Ayanna Pressley. Tamblyn’s three guests spoke about overcoming hardships and facing discrimination as they worked their way to their current career successes.

Pressley brought the crowd to a rousing holler as she closed the panel with an inspiring speech about the need for women and marginalized communities to speak up without fear.