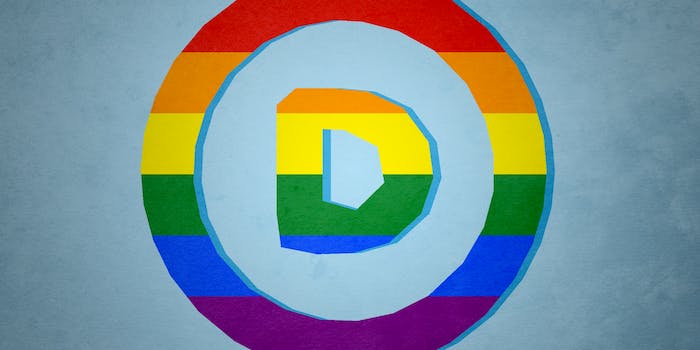 The 2016 DNC features an unprecedented 516 LGBT delegates—28 of whom are trans.

There are a lot of star-studded events at the Democratic National Convention—from power luncheons to Hollywood speakers to First Lady sightings—and Tuesday’s LGBT caucus was no exception.

The noon caucus, which was open to the public, was overcrowded with wall-to-wall people who packed in to see a lineup of speakers, LGBT icons, celebrities, and the unprecedented 516 LGBT delegates—28 of whom are transgender.

Among those speaking onstage was the NBA’s first out gay player, Jason Collins, who brought his twin brother, Jarron, with him for a frank discussion of what it means to be a straight ally—and a lot of jokes about being really, really, ridiculously tall.

Jason told the story of his brother’s job as assistant coach for the Golden State Warriors and how he intervened during a homophobic incident in which two of the team’s players were featured on the “kiss cam” and they goaded and mocked about how they should kiss each other.

“My brother got upset, because at the end of the day that’s a gay joke,” said Jason, “and after the game…my brother went up to the PR announcer and said, ‘Do you realize what you’re doing by having that segment up there,’ and they were very dismissive. And my brother ended up cussing them out.”

The anecdote got laughs from the crowd, but the message was clear: Allies are a vital part of ensuring that LGBT people are treated with respect.

Following the Collins brothers were business and political leaders who offered emotional testimony about the recent strides made in the LGBT rights movement. One of the most highly anticipated speakers, New York Gov. Andrew Cuomo, boasted of his state’s precedent-setting record of adopting LGBT protections early on.

“New York is 18 million people, and it’s people from literally all across the globe,” said Cuomo. “New York, to survive, made a decision very early on that we have to find commonalities as opposed to finding differences.”

Much of Cuomo’s speech presented a view of the Democratic Party as the sheer opposite of Donald Trump’s platform—saying that the “other side talks about building walls, we talk about building bridges.”

After Cuomo left, Rep. Mike Honda of California took the podium to talk about his transgender granddaughter, Malisa, and how the 9-year-old girl led him to open his mind—and heart—to the trans community.

Honda’s speech was followed by a gathering of some of the historic 28 transgender delegates.

The trans delegates came from across the nation, but managed to coordinate activities together through a private Facebook group, according to California delegate Tiffany Woods.

“Without transgender, and gender nonconforming, and nonbinary leadership at the legislative level, at the national level, at the DNC,” Woods told the Daily Dot, “we’re not going to effectively be able to address all the anti-LGBT legislation that Republicans and conservatives are throwing out there.”