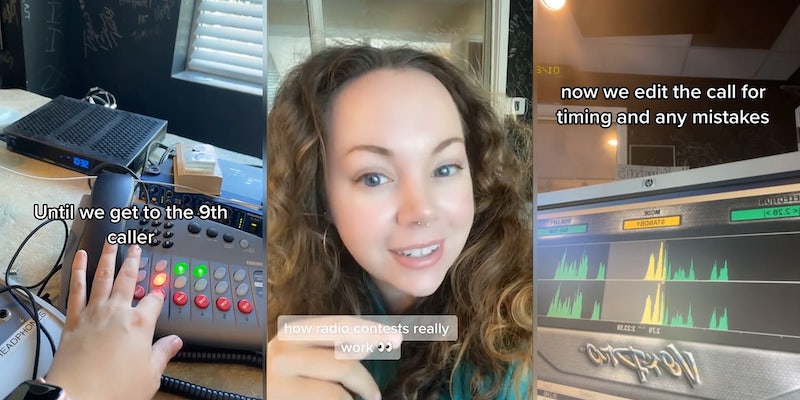 'You missed the part when the real '9th caller' don’t have the energy we want so we take the next caller.'

If you’ve ever been listening to the radio on your morning commute and wondered how the station’s many contests work, wait no longer. TikTok user and radio DJ @ayeeedubb has your answer.

@ayeeedubb is a radio DJ for K97.5 in North Carolina. In a video with over 310,000 views, she documents the process of running a radio contest, starting with the initial request for calls and ending with the winning call playing on air.

First, @ayeeedubb puts out the call for listeners to call in before cutting to music and commercials.

In the intervening minutes, she begins to receive calls, telling each caller that they’ve been rejected until she hits the ninth caller, the winner of the contest. From there, she tells the caller that they’ve won and records the conversation, finishing the call by telling him to plug the station’s call sign.

After the call has finished—and while music and commercials are still rolling—she edits the call, making it more radio-friendly by cutting out dead air and making sure the audio is clean before it goes live.

Once the music and commercials have ended, @ayeeedubb plays the recorded call as if it were live.

In comments, @ayeeedubb answered users’ other questions about the process.

For example, when a commenter asked how a caller can actually claim their prize, @ayeeedubb explained that “Someone from our promotions dept calls the winners and give more details about getting prizes.”

When some commenters speculated that callers would forget the name of the station they were calling, @ayeeedubb confirmed that to be true.

“I get callers who forget all the time,” she wrote. “They will be like ‘uhhhh’ and I just step in and tell them the station and they repeat it and I edit it out.”

As for whether the caller was really caller number nine, @ayeeedubb says he was. However, if time is running short, @ayeeedubb writes that it’s not uncommon to have a caller suddenly bump up a few places in line.

“Unless I’m running out of time before the winner is supposed to play, I’ll then just pick a line to be ‘9,’” she explained.

Above all, commenters were thankful for the insight into a unique part of their everyday lives.

As one user wrote, “Damn you just answered my lifelong question thank you.”

Update 4pm CT, Oct. 13: In an Instagram DM exchange with Daily Dot, @ayeeedubb explained her inspiration for her page.

“What inspired the video was a number of things!” she said. “I had a friend tell me I should start showing more of my radio work on TikTok — like more behind-the-scenes, since there is probably a lot that people don’t know about radio or what a radio broadcaster does — so I definitely wanted to shine light on that. And also, when I was growing up, there was NOTHING online that I could find about radio and how to be one and what they do, so I also wanted to start creating videos that showed more of that as well for people who wanted to know if they actually wanted to be in radio/media.”

As for this video itself, she said she simply finds the process fascinating.

“I think the whole radio contest process is interesting because it’s a lot of ‘theater of the mind’ tactics to make it sound way more interesting on air than what may have really happened,” she detailed. “I had this contest going on so I was like, ‘okay let’s just film this process and see what happens’ and it went extremely viral.”