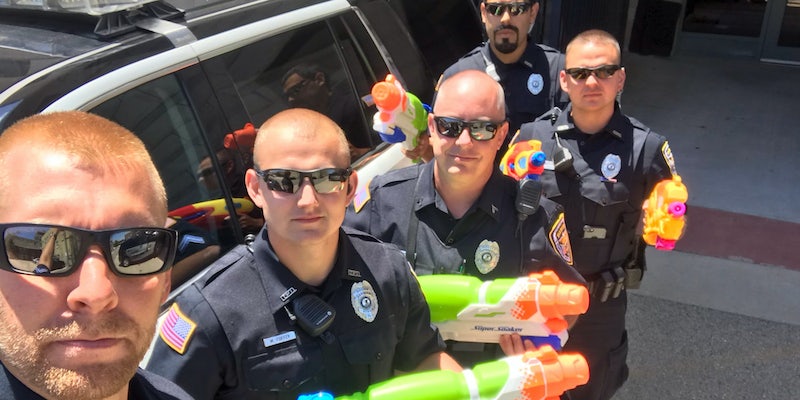 'Remember when a cop killed a 12 year old for having a toy gun?'

Videos from the Dixon Police Department in Illinois are sparking a tense online discussion.

In the lead up to Independence Day, the Dixon Police Department’s Twitter page began teasing a city-wide water fight between civilians and police. When the day finally arrived, the department’s Twitter was flooded with videos and photos of officers joyously engaging in water fights with local youth.

To some online viewers, the brightly colored guns in officers’ hands reminded them of a harsh memory: Tamir Rice, a 12-year-old Black boy who was killed by Cleveland police in 2014. Officers blamed a toy gun, which Rice had been playing with, for his death. The airsoft replica was missing the orange tip, which they said would have more easily identified it as a toy. Rice was shot twice in the chest by officers and later died in the hospital.

As viewers online watched officers engage in playful water combat, many of them were reminded of Rice’s toy gun. They called out police for Rice’s death, emphasizing the irony in officers firing toy guns on civilians when a child was killed for doing the same.

“Remember when a 12 year old was shot to death for having one of these because I do,” one commenter noted.

Soon, the comparison was being drawn by hundreds of people. The Dixon Police Department’s Twitter feed has since been overtaken by the discussion. Some people found DPD’s videos particularly disturbing given that Rice would have graduated high school this summer. He would have celebrated his 18th birthday on June 25 if he were still alive.

As criticism continued flooding in, #TamirRice and the comment section for DPD’s page became predictably polarized. Some commenters called out the officers for engaging in play with similar toys to the one Rice was killed over, while other’s noted differences in the situations. Most people trying to justify the police violence leaned on the realistic look of Rice’s gun to excuse his death.

The discussion spurred another comparison, as people pointed out stark examples of white privilege. A commonly used example leaned on Mark and Patricia McCloskey, who recently went viral for pointing guns at protesters. The McCloskeys, who were wielding real guns with their fingers on the triggers, were not arrested or charged by police. They remain employed as personal injury attorneys.

The conversation is still going strong. Each of DPD’s recent uploads is flooded with Rice’s name, and comments calling out police for their violent history. Supporters of the police, and particularly of Dixon police, are still jumping to their defense. They note that Rice was killed in Cleveland, not Dixon, and that the cops in question were engaging in simple play.

These arguments aren’t enough for most people, however, as young Black men continue to be killed in situations a white man would likely walk away from.