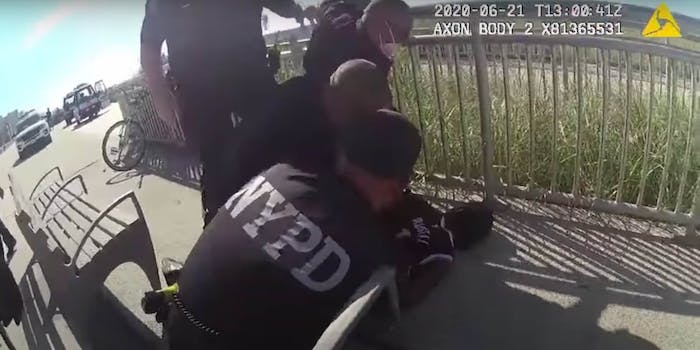 The officer was suspended without pay.

A New York City Police officer has been placed on leave without pay after a video surfaced showing him putting a Black man in a chokehold during an arrest on Sunday, according to the New York Daily News.

A YouTube channel titled NYPD Exposed shared a video on Sunday showing at least four officers pressing to the ground a Black man who was identified as Ricky Bellevue by the Daily News.

“Yo stop choking him bro!” a person is heard screaming in the video. “Hell he’s choking him! Let him go!”

“He’s out! He’s out,” says the person behind the camera. The officers move, and the man is seen lying on the ground, motionless.

As the video zooms in closer, the officer is heard saying, “Back up!”

“Fuck you!” someone screams from off camera.

As the officers proceed to get up and leave, someone says, “We’re listening to music, they fucking coming and choking us!”

Amid the chaos, a woman is heard challenging the arrest and saying a few times, “They were doing the same thing!”

The officer who put the man in the chokehold has been identified by the Daily News as David Afanador. Afanador’s name is also seen on a badge in the video.

Bodycam footage shared by the NYPD shows him stepping out of a car and approaching the scene.

Two men are seen having conversations with the officers before the victim appears in front of the cops.

“Say something stupid to me you fuck boy,” says a man who is also recording video on his phone. Bellevue is seen speaking to the officers from a distance.

“I would like to ask why y’all standing here right now! Is there a reason?” says the other man.

He proceeds to ask the officers their badge numbers and why there are so many officers at the scene.

Bellevue reappears while his companion tries to push him back to stop him from speaking to the officers.

At one point, while Bellevue is still at a distant from the officers, Afanador is seen pouncing on him after he says something to the officers.

NYPD Commissioner Dermot Shea condemned this use of force and said, “While a full investigation is still underway, there is no question in my mind that this immediate action is necessary.”

“Today was the fastest I have EVER seen the NYPD act to discipline an officer,“ New York City Mayor Bill de Blasio said in a tweet regarding the action taken against Afanador. “This is how it needs to be.”