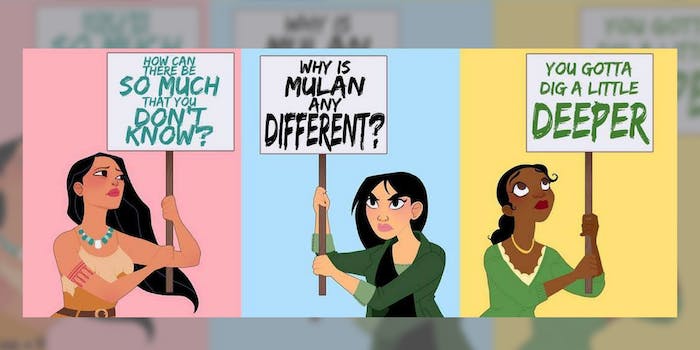 The Disney Princesses get political in this ‘Women’s March’ series

'They can't order me to stop dreaming.'

We’ve seen Disney Princesses reimagined as everything from puppies to cement mixers, but in this new illustrated series, these women dare push the envelope as protesters in President Donald Trump‘s America.

“How can there be so much that you don’t know,” Pocahontas’s poster questions, following the intro to her song, “Colors of the Wind.”

Niday told Teen Vogue that her series was inspired by January’s Women’s March on Washington that took place the day after President Trump’s inauguration.

“I felt inspired by the way women expressed themselves on their signs, from the witty and charming to the downright scathing … I wanted to hold onto that message as my newsfeeds dissolved back into squabbling and finding faults in our difference, rather than understanding,” Niday said.

To capture that feeling, Niday decided to use the quotes from the characters themselves instead of impressing her own ideas upon them: “I didn’t want to put words into their mouths … I chose quotes from their movies, mostly spoken by the heroine herself, and tried to pick moments that would allude to their story as whole, had deeper meaning within the movie, or referenced modern issues.”

Click through Niday’s Tumblr post above to see the individual Disney Princess illustrations, or read her Teen Vogue interview here.