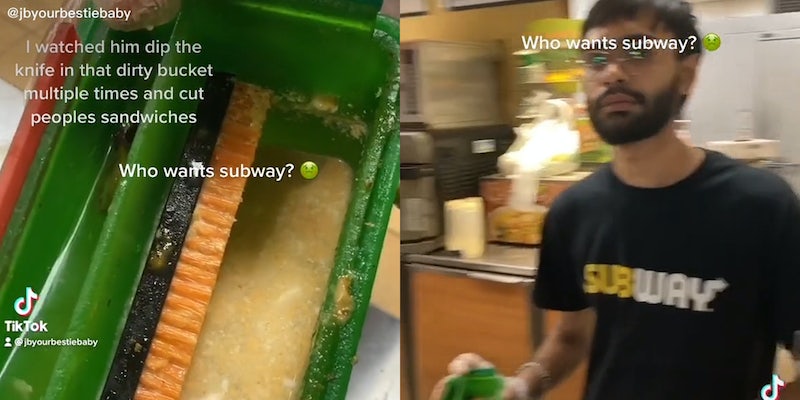 'It’s not his fault it’s the company’s fault.'

A TikToker confronted a Subway worker for allegedly using dirty water to clean the knife he was using to cut customers’ sandwiches, a viral video shows.

The video has been viewed over 1.8 million times so far. In the video, posted by @jbyourbestieboy, a man confronts a Subway employee about the bucket of what appears to be cleaning solution.

“I watched him dip the knife in that dirty bucket multiple times and cut people’s sandwiches,” the text overlay and text-to-speech effect note.

The state of the cleaning solution, which appears yellow in the video with a piece of tomato floating in it, was also cause for concern among many viewers.

“They have sinks,” one commenter wrote. “They can rinse that bucket very easily and consistently so it doesn’t look like that. That’s pure laziness.”

However, some suggested the customer direct his concerns at the manager and Subway, not the worker.

“It’s not his fault it’s the company’s fault,” one said.

“Don’t yell at him, yell at management, seems he’s been trained this way,” another commenter wrote.

Some commenters who claimed to be former Subway employees shared that the sanitizing solution was standard procedure but that the state of the bucket in the video was unacceptable by the standard of training they received.

“Subway worker!” one commenter wrote. “The water has sanitizer in it, tho we never let the water get this bad where I work, the water is typically very clean and has two brush on the side that touch to scrub the blade between passes. They definitely should have changed that water tho.”

The Daily Dot has reached out to @jbyourbestieboy via Instagram direct message and Subway directly.