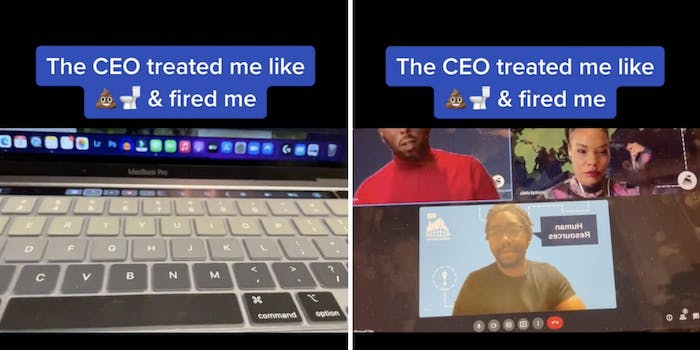 ‘He cussed me out and tried to belittle me’: CEO berates, fires unpaid intern during Zoom call in viral TikTok

‘How are you more mature than the CEO?’

Users were shocked yesterday when a former intern revealed a video of his ex-boss, tech CEO Lawrence Griffith, cursing him out in a viral TikTok.

The video, which has over 229,200 views, was posted yesterday by Jon (@afromanpower), who says he is a former unpaid intern at the mobile technology company Digital Factory.

Digital Factory’s Founder and CEO, Lawrence Griffith, is shown in the video cussing at the then-intern over a Zoom call with another employee. The CEO says in the recording he is upset the intern did not promptly respond to his message requesting a phone call.

“Have you lost your fucking mind?” the CEO says in the video, raising his voice. “No, no, no, no. This ain’t how shit works. It don’t work like that… Normal etiquette is that you say something. You don’t just say nothing, that’s not how this shit works…. That shit is rude as fuck. Do you understand that?”

“I’m sorry that you feel that way. I just knew we were going to get together today,” the intern says as his boss tries to cut him off. “You’re getting really upset… You’re not going to talk to people crazy, Lawrence. C’mon. You gotta relax.”

The intern captioned the video: “What happens when you work a toxic work environment. He cussed me out and tried to belittle me. He has a history of doing this to other Unpaid Interns within the company. I’m just the only one really saying something about it.”

In a follow-up video, the former intern claims he was slammed with work when the CEO asked him to meet on a Friday. The TikToker said he wasn’t able to respond until the weekend arrived, so he decided instead of bothering his boss at weird hours, he would wait until Monday to talk with him at a meeting which was already scheduled.

In another follow-up video, the TikToker also claims the majority of people working at Digital Factory are unpaid interns expected to be available 24/7 despite having other paid jobs.

The viral video exposing the verbal abuse sparked outrage and debate in its comments section.

“How are you more mature than the CEO?” another asked.

However, a few users accused the intern of being at fault for the interaction.

“This man took the L respect your boss who does this kid think he is,” one user argued.

“Yeah, you can’t tell your CEO to calm down buddy,” another responded.

The TikToker responded to the negative comments in another follow-up video: “Why not? Why can’t I? He was tripping, he was wilding, he was cussing me out…I am free labor. And I accepted that, I was OK with that. But I’m not going to be treated as scum, as the dirt underneath your heel, because he wants to pump his chest.

Many users responded to the TikToker’s follow-up videos supporting him.

“YOU HAVE EVERY RIGHT TO DEFEND YOURSELF AND BE RESPECTED,” one user validated.

“Why are people so obsessed with worshiping CEOs like they’re demigods,” someone else responded.

Digital Factory is a company which provides geolocation technology which can be integrated into mobile apps. When used, it can allow apps to relay targeted messaging to users based on their location, according to Digital Factory’s website.

Only 42% of employees who reviewed Digital Factory on Glassdoor approved of its CEO. Although many reviews of the company were positive or neutral, some claimed to have negative experiences with unpaid work, verbal abuse, and disregard for time-off.

“Angry responses to questions about being paid, want you to be available 24/7 without pay. CEO throws childish temper tantrums and curses at everybody then tries to cover it up as claiming to be ‘passionate’… Avoid this toxic and abusive workplace,” one review from September 2021 stated.

“Meetings arranged at odd times and on weekends, no respect given to your time…Don’t expect people to give 100% commitment with 0% pay from your end,” another said in January.

The viral TikTok series drew attention to the common experience of employees facing abuse from their bosses. In 2021, over 43% of people working remotely reported verbal mistreatment on the job, and over 65% of the perpetrators of the verbal attacks were bosses, according to a 2021 survey by the Workplace Bullying Institute.

The Daily Dot reached out to Lawrence Griffith via Twitter message, Digital Factory via email, and Jon via TikTok comment.

Update 4:01pm CT, April 6: The Daily Dot spoke with the TikToker mentioned in our article via audio call after this story was published. He says that he deleted his original TikToks: “I had to take down the videos unfortunately, I’m just too poor fight this organization to the bitter end.” (We have replaced the deleted TikTok with another user’s upload of the same viral incident.)

He also shared a screenshot of an alleged email from Digital Factory threatening legal action if he continues to share recordings of company meetings due to a non-disclosure agreement he signed. He said he wants to continue sharing his story, but is worried about affording a lawyer.

“I’m in debt from college loans so I’m not going to be able to afford the lawyers to fight this or put my voice out there. Yeah, the non-disclosure agreement stops me from sharing certain things, but it should not protect abusers—and they are using the law to protect abusers,” the TikToker told the Daily Dot.

The TikToker also said he was disappointed that someone he looked up to, one of few Black executives he knew of in his field, spoke to him in a disrespectful way. He also shared that he wants to change the narrative around workplace abuse, and thinks younger generations are more willing to stand up for themselves than older generations.