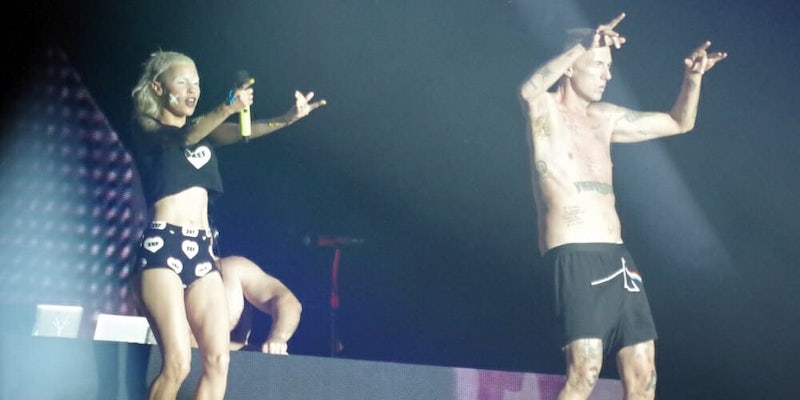 Ninja denied the incident was a hate crime.

A former videographer for the South African alternative hip-hop duo Die Antwoord says a video from 2012 shows the musicians involved in a homophobic hate crime.

The 11-minute video was recorded and posted by the band’s former videographer Ben Crossman but has now been removed due to a “privacy claim” and is causing a backlash against the band members, who deny any wrongdoing. According to PinkNews, the video opened with a simple message: “This video is for documentary purposes. Homophobic attacks and homophobic violence should be denounced.”

In the video, which was reportedly recorded at the Future Music Festival in Adelaide, Australia, in 2012, Die Antwoord rapper Ninja, legally Watkin Tudor Jones, appears to get into a short fight with Hercules & Love Affair musician DJ Andy Butler. Ninja can be seen shoving Butler and spitting at him. Butler responds by throwing a drink at Ninja. During brief fisticuffs, Yolandi Visser (legally Anri du Toit), can be heard using homophobic slurs repeatedly, including saying, “Oh my god, faggots are fighting, this is so cute.” Butler escapes and runs away. Visser continues to yell slurs at the fleeing Butler, shouting, “Run faggot, run. Run for your life, bitch.”

The rest of the video showed Ninja and Visser finding security staff at the festival and reporting that Butler had groped Visser. Although the version Crossman posted was removed from YouTube, people have been sharing clips of the fight.

In a statement on Facebook, Ninja rejected the incident as a hate crime and attempted to offer context. “This fight had nothing to with the fact that this guy was gay,” Ninja wrote. “If a person (no matter what their sexual preference it) keeps harassing us over and over, then physically harassed Yolandi, there will obviously be repercussion.”

He then claimed there were repeated incidents of harassment from Butler over the course of their time on tour with a group of musicians including Butler. “At the end of the tour, during our final festival in Adelaide, the guy from Hercules followed Yolandi into the girls bathroom and wouldn’t let her out, and she had to physically push past him,” wrote Ninja. He also claimed that Crossman edited the video to make them look bad because they fired him.

If Butler was repeatedly harassing Visser, physically responding to that is certainly not a hate crime. But noticeably, an apology for repeatedly using a homophobic slur was not present in the statement.