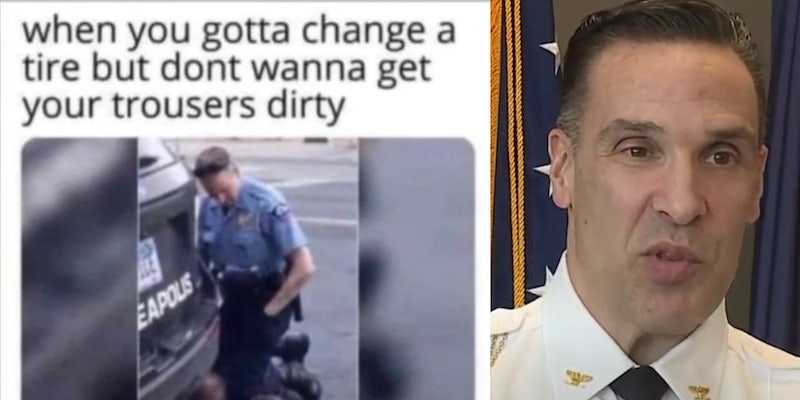 According to WXYZ, the Sterling Heights Police Department launched an internal investigation once it learned of the officer’s racist post. The officer is currently on unpaid leave until the completion of the investigation.

The post shows a photo of former Minneapolis police officer Derek Chauvin placing his knee on Floyd’s neck. The image was shared this week with the words, “When you gotta change a tire but don’t wanna get your trousers dirty.”

WXYZ reports that the Detroit suburb’s chief of police said the officer, who remains unidentified, could be face discipline including termination.

“If we’re not policing our own guys, I don’t blame any resident for not trusting a police officer when they get pulled over or arrested,” Chief Dale Dwojakowski said in a statement to WXYZ. “As a police officer, when you post something, it carries tremendous weight. That’s why we have a policy that says you can’t post anything inflammatory against a religion, race, gender.”

Some aren’t particularly ready to give city leaders or Sterling Heights police much credit, taking account of the town’s history with race. One tweet said, “Racist police department investigating their own racist cops. I wonder how this will go.”