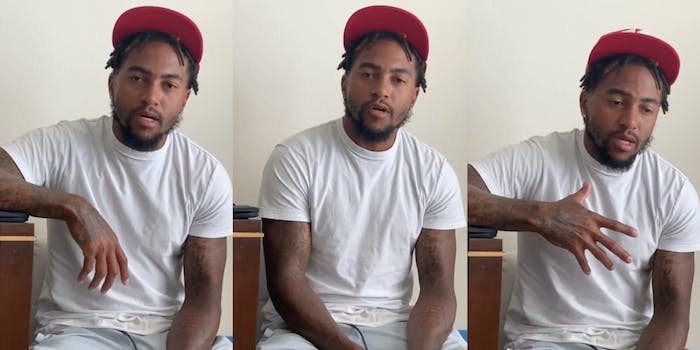 He says he didn't mean for it to be offensive.

Over the July 4 holiday, Jackson posted on Instagram a photo of a quote claiming to be from Hitler.

“Hitler said, because the white Jews knows that the Negroes are the real children of Israel and to keep Americas secret the Jews will blackmail America,” the quote read. “The will extort America, their plan for world domination won’t work if the Negroes know who they were.”

According to PhillyVoice, the origins of the quote are from a book with less than credible authors.

Jackson also posted on Saturday and Monday admiring Nation of Islam leader Louis Farrakhan, who is anti-Semitic, according to espn.com. The posts are no longer available on Jackson’s page, but they included a clip of Farrakhan claiming Dr. Anthony Fauci and Bill Gates are using a virus vaccine to “depopulate the Earth,” according to NBC Sports.

After coming under fire for the posts, Jackson reposted the original false Hitler quote on his story, according to USA Today.

“Anyone who feels I have hate towards the Jewish community took my post the wrong way,” Jackson wrote on the post. “I have no hatred in my heart toward no one!! Equality. Equality.”

He later reposted the quote again, with only the second sentence about extortion visible, according to PhillyVoice.

The Eagles’ statement said the organization spoke with Jackson about apologizing to the community and it is continuing to evaluate the circumstances to take appropriate action.

“Regardless of his intentions, the messages (DeSean) shared were offensive, harmful, and absolutely appalling,” the statement on Twitter read. “We take these matters very seriously and are committed to continuing to have productive and meaningful conversations with DeSean, as well as all of our players and staff, in order to educate, learn, and grow.”

Following the Eagles’ statement, Jackson posted a video to Instagram apologizing for the posts.

“I never want to put any race down or any people down. My post was definitely not intended for anybody of any race to feel any type of way, especially the Jewish community,” Jackson says in the video. “When I posted what I posted, I definitely didn’t mean it to the extent you guys took it.”

Jackson says he should have “never posted anything Hitler did because Hitler was a bad person.” He also says was trying to uplift and enlighten African Americans.

According to USA Today, the Eagles owner, Jeffrey Lurie, and the general manager, Howie Roseman, are both Jewish.

Jackson began his NFL career in Philadelphia in 2008, according to NFL.com. He signed a three-year contract to return to the team in 2019 for $27 million.