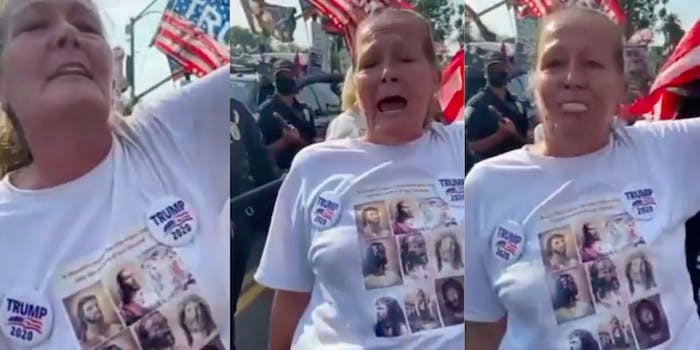 Betrayed by your own dentures.

An older woman was recorded going on a xenophobic attack toward an Asian woman at a pro-President Donald Trump rally in California, but as she goes on her racist tirade, her dentures continue to fall out of place.

“You’re in America!” the pro-Trump protester yells at the counter-protester. “Go back to where your ancestors came!”

The counter-protester, who is holding a “Trump/Pence out now!” sign, can be seen flipping the woman off.

“F*ck communism!” the woman shouts, as her dentures continue to slowly fall out of place

“My name is—” she says, before being cut off by her own dentures. They almost fall out of her mouth, but she manages to catch them, catch her breath, put them back in, and continue her verbal attack.

The woman then identifies herself as Carla Canada and shamelessly plugs her YouTube, which she says is “Carla and Company.”

Videos on her YouTube include Canada bashing California Governor Gavin Newsom for his face mask mandate and applying makeup while playing Trump interviews in the background.

Canada did not immediately respond to the Daily Dot’s request for comment.