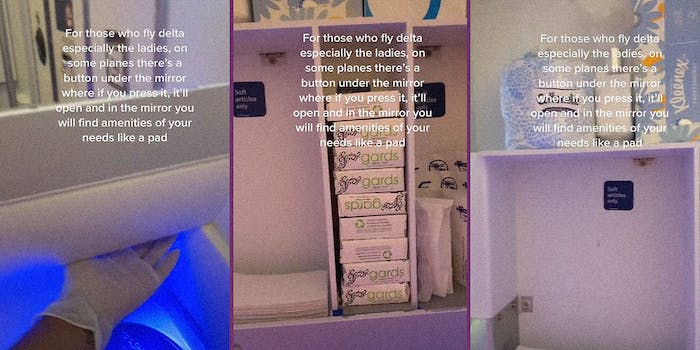 ‘This would’ve been nice to know’: Delta worker reveals hack for dealing with your period on an airplane

It's not just Delta.

A Delta Air Lines employee shared a mindblowing tip for flying that many TikTok users couldn’t believe they had never heard about before.

Flying is almost always a hassle on some level or another, but it can be particularly wearisome for those who find themselves 35,000 feet in the air only to discover they should have packed a few tampons in their carryon.

But on some Delta flights, there’s a simple, albeit hidden, solution.

TikToker @joselinlora7 posted a video showing that there’s sometimes a hidden compartment behind the bathroom mirror that contains helpful supplies one might need, such as sanitary pads.

She explained that the compartment is generally accessed via a button underneath the mirror. In some planes, she says, those supplies are located in a pull out box on the wall.

Joselin’s video also shows the cabinet is also stocked with Kleenex, paper towels, and extra toilet paper, all of which seem like incredibly helpful items passengers would benefit from knowing about.

“When I was younger I got my period on the plane and used rotating toilet paper during a 5 hr flight,” one user commented. “This would’ve been nice to know then.”

“I never knew that existed,” another added.

Others made similar remarks, having had no idea such a magical compartment of useful things existed.

But it isn’t just Delta; users confirmed finding similar stashes of supplies on planes utilized by other airlines, as well.

While several people theorized that these items are just for flight attendants, Joselin and others rebutted that idea, noting that “we always have extra.”

As for why everything is stashed away so secretively rather than laid out in the open, several commenters reminded everyone that if turbulence were to hit, “everything in the [bathroom] becomes a projectile.” Safety first!